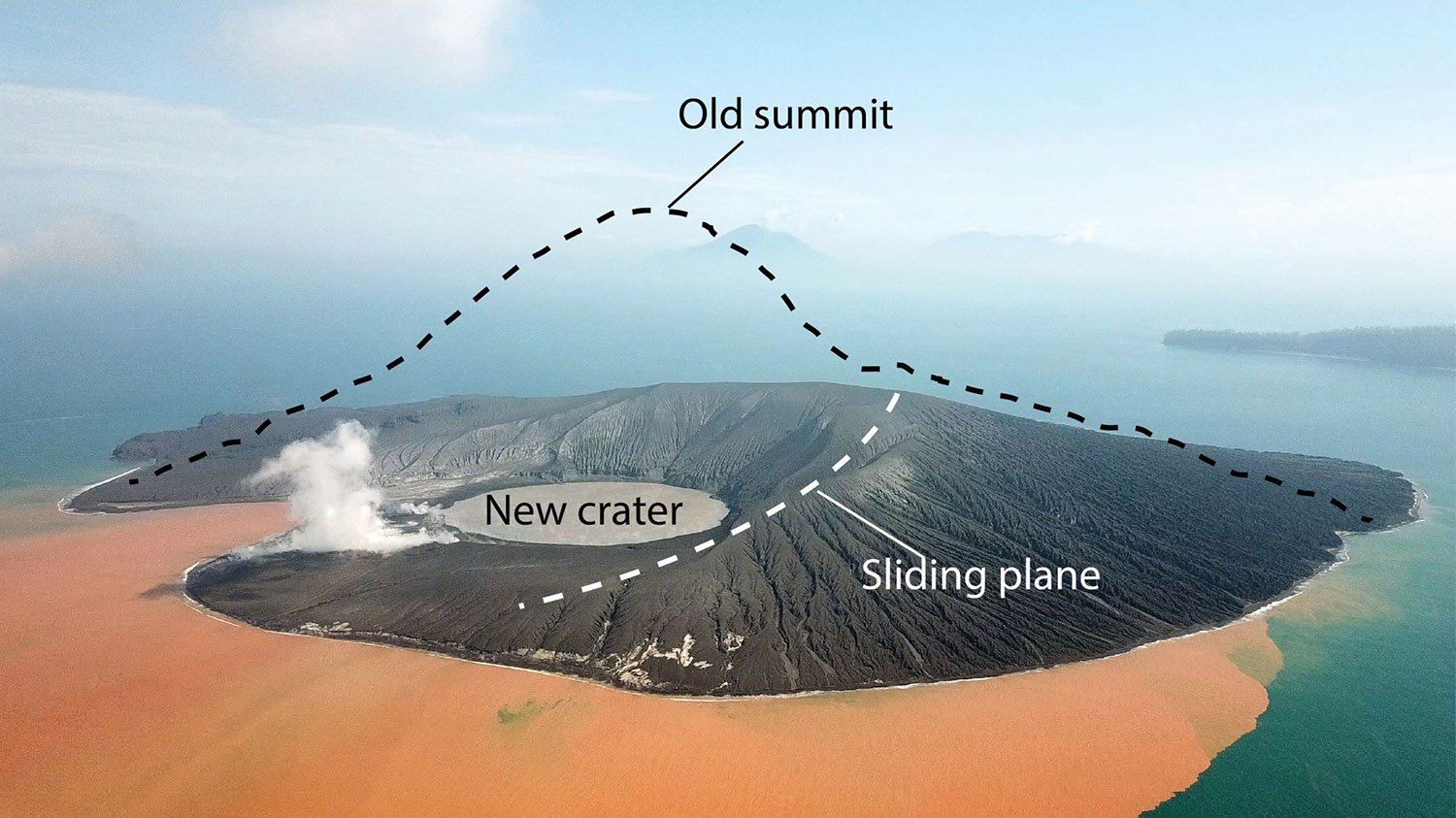 On 22 December 2018, a flank of the Anak Krakatau volcano plunged into the Sunda strait between the Indonesian islands of Sumatra and Java, triggering a tsunami that killed 430 people. An international research team led by Thomas Walter of the German Research Centre for Geosciences GFZ in Potsdam has now shown that the volcano produced clear warning signals before its collapse. This was the result of the analysis of a large amount of data from very different sources collected during ground-based measurements as well as by drones and satellites. Satellite data, for example, showed increased temperatures and ground movement on the southwestern flank months before the catastrophe. Seismic data and low-frequency sound waves from a smaller earthquake two minutes before the sudden collapse of a large part of the volcano had heralded the fatal event. This collapse finally triggered the deadly tsunami. The researchers want to use the analysis of this complex event cascade to improve monitoring and early detection of other volcanoes. Their study was published in the journal Nature Communications.

Volcanic islands like Anak Krakatau often consist of unstable material. Therefore, every now and then a collapse of volcanic flanks occurs on these islands. Yet, this had not been precisely measured until now. “At Krakatau, we were able to observe for the first time how the erosion of such a volcanic flank took place and which signals announced it,” Thomas Walter, a volcanologist at the GFZ explains. In their study at Anak Krakatau the researchers were able to show that over months the movement of the southeast flank towards the sea formed a kind of slide. The sudden accelerated slide of the flank into the sea, the so-called flank collapse, lasted only two minutes and was measured by seismographs and infrasound networks before the first impacts of the tsunami had reached the coasts.

“We used an exceptionally broad range of methods: From satellite observation to ground-based seismic data, from infrasound to drone data, from temperature measurements to chemical analysis of eruption products,” says Thomas Walter. “Today’s almost unrestricted access to worldwide data was critical in this. In the days following the tsunami, it allowed us to analyse this event at different locations in different countries at the same time.”

Improved monitoring systems as a goal

Similar to Anak Krakatau such events could also herald themselves on other volcanic islands in the Atlantic, Pacific or even in the Mediterranean, to which the results of the study could then presumably be transferred, according to Walter.

“We assume that tsunami early warning systems must also take into account events caused by landslides. Those volcanoes that are at risk of slipping should be integrated into the monitoring systems.”

Seismologist Frederik Tilmann from GFZ and Freie Universität Berlin was also involved in the study. He says that the unusual seismic pattern of the flank collapse was a particular challenge when analysing the data. In contrast to tectonic earthquakes, only a small part of this pattern consisted of high frequencies around 1 Hertz (1 oscillation per second). Instead, the earthquake waves contained stronger components in the range of low frequencies up to about 0.03 Hertz (1 oscillation per 35 seconds). “This property was the reason why the event was not detected in any routine evaluation,” says Tilmann.

The effort of monitoring systems will pay back, since a large part of the victims of volcanoes in the past two centuries have not been killed by the eruptions themselves, but by landslides and tsunamis, according to Walter. The new results show that the danger of collapsing volcanoes has so far been underestimated. The first step now is to identify the volcanoes at particular risk and to supplement existing measurement methods with additional sensors and new algorithms for evaluation. “We are confident that our findings will lead to the development of improved monitoring systems,” said Walter.