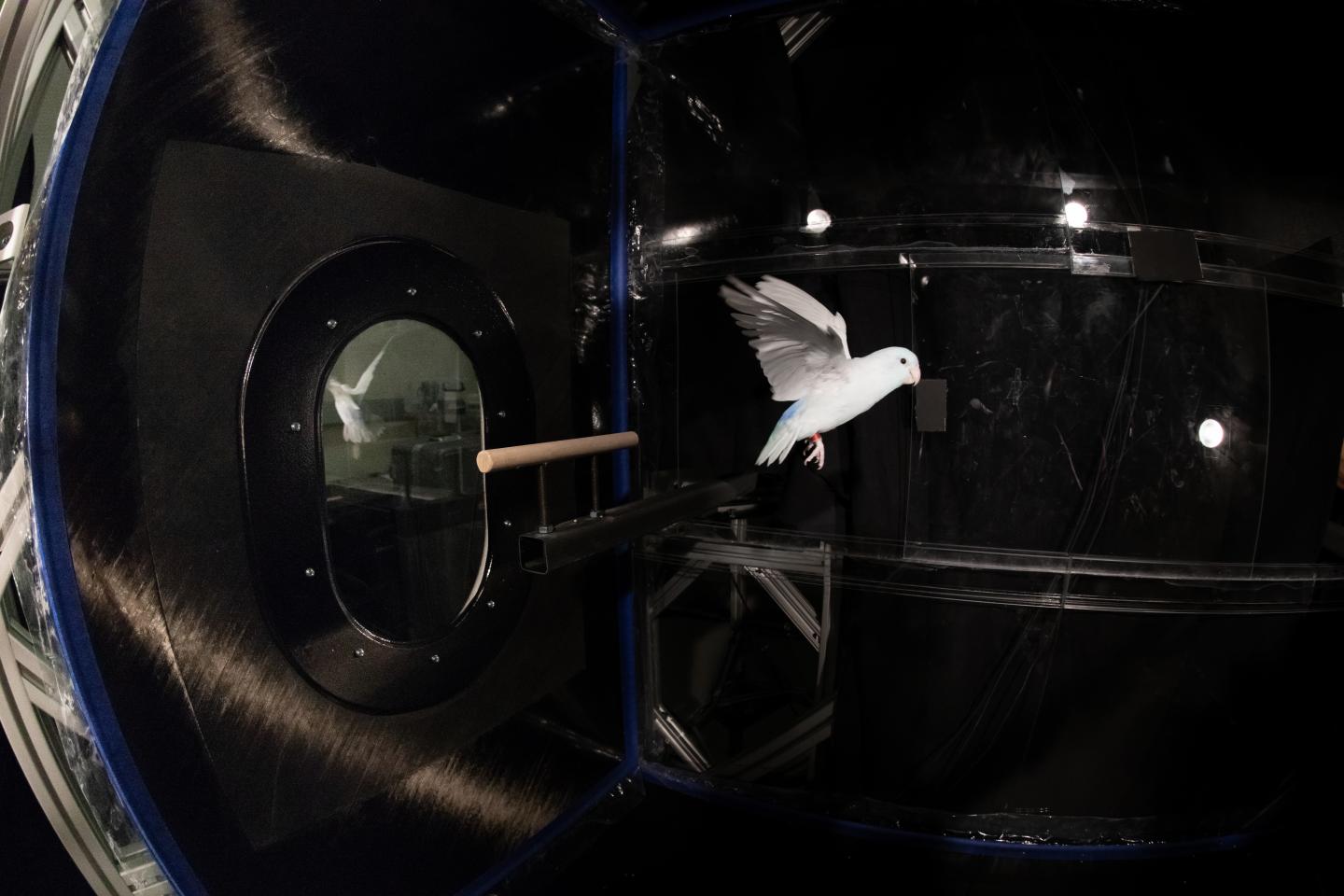 Future aerial design may owe a nod of thanks to five parrotlets flapping around in an instrumented flight chamber at Stanford University. They revealed that counter to conventional understanding of how animals and planes fly, the birds can utilize drag to support their body weight during takeoff and employ lift as a brake in their landings.

“The things you learn in class are not always true,” said David Lentink, assistant professor of mechanical engineering. New findings can alter the understanding of familiar concepts. In this case, he said, “We must revise our idea of the function of drag.”

Conventional wisdom tells us that drag is a force that slows an object down and lift is a force that counters gravity, lifting a bird or airplane into flight. But measurements taken by graduate student Diana Chin, published Nov. 25 in Nature Communications, show that birds actually draw on drag to support up to half their body weight during takeoff, and that lift helps them brake during landing.

To measure the horizontal and vertical forces instantaneously, Chin built a setup with sensor panels on the floor, ceiling, front and back of the birds’ flight paths. Each panel contained three sensors, as did the two perches for bird liftoff and landing, summing a grand total of 18 sensors to measure the minuscule forces generated by a 30-gram bird.

Windows built into the panels allowed Chin to film wing movements with five high-speed cameras shooting at 1,000 frames per second. By combining the measured motion from the images as well as the force measurements from the sensors, Chin and Lentink could for the first time determine the magnitude of lift and drag at takeoff and landing.

“Something like this has never existed before,” said Lentink. “The measuring technology itself is an engineering achievement.”

As such, it took Chin several iterations to successfully design and fabricate the structure. The next challenge was getting the lab’s parrotlets – Gaga, Gary, Oreo, Aurora and Boy – to voluntarily fly inside it.

Fortunately for Chin, parrotlets are very trainable birds and will happily fly the 80 centimeters from perch to perch for a millet seed. From these flights, Lentink and his team found that by tilting their wings at an incline during takeoff, the birds can orient their lift forward for acceleration and their drag upward to support up to half of their body weight.

“Takeoff is the most important thing, but you hope for a safe landing too,” Lentink said. The repurposing of drag during takeoff actually maximizes the birds’ generated forces, while reorienting lift can help them slow down without the power costs of braking before making the controlled collision they call a landing. Many other flapping animals probably make similar use of lift and drag during takeoff and landing,” said Chin. Juvenile birds, seabirds who also swim underwater and more primitive bird species that have difficulty generating the necessary aerodynamic force with their wings would find this tactic especially useful.

Birds’ ancient ancestors, called protobirds, also had wings that primarily generated drag. With the knowledge that drag could actually help support bodyweight in takeoff, Chin and Lentink both acknowledge that there may be some species that have previously been classified as flightless that could have used drag to become airborne.

After 150 million years of bird evolution, “if modern birds still make use of it, that tells you a lot,” said Lentink. “That doesn’t mean its efficient, but it’s effective.”

Should we be rebuilding all airborne technologies to reflect this discovery? Not quite. While Lentink would leave the design of a Boeing 747 alone, he does suggest revisiting both the way the evolution of bird flight and aerodynamics are taught.

“I think a lot of drawings in flight textbooks can be misleading, especially when it comes to animal flight,” Chin said. Drag could have played a significant role in the evolution of animal flight. For precursors to birds, using drag to support their body weight could have helped them ramp up their ability until their wings were able. None of the aerospace literature came up with using drag to support weight,” said Lentink as he pulled both biology and aerodynamics textbooks off the shelves, pointing to diagrams of birds in flight with their associated forces drawn in. “That standard drawing has to be revised.”

Even if conventional airplanes won’t be drastically changing, Lentink does see potential applications in the design of aerial robots. Just as with birds, utilizing drag to get airborne may not be the most efficient method, but it could help get them off the ground.