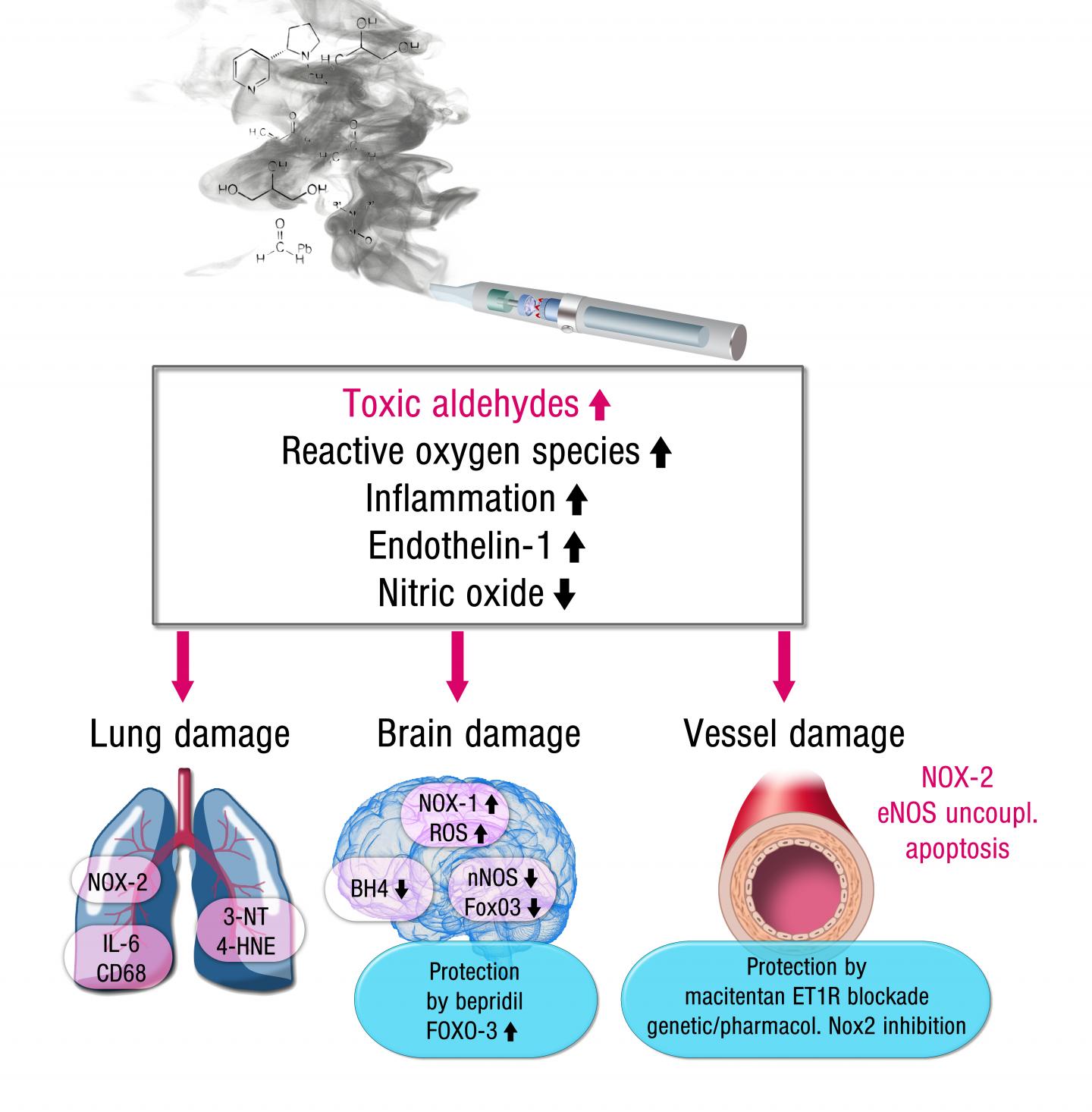 Cardiologists have issued a stark warning about the dangers of e-cigarettes, particularly for young people, as results of new research show the damage they cause to the brain, heart, blood vessels and lungs.

The study, which is published in the European Heart Journal today (Wednesday), also identifies some of the mechanisms involved, for which there has been limited information up until now.

Professor Thomas Münzel, of the Department of Cardiology of the University Medical Centre Mainz in Mainz, Germany, who led the study, said e-cigarettes were so dangerous, as well as addictive, that countries should consider banning them, action that countries such as India, Brazil, Singapore, Mexico and Thailand have already taken.

“We need to focus on the youth because this is by far the largest market,” he said. “According to the US Centers for Disease Control and Prevention, over 3.6 million children in the US use e-cigarettes, with a jump of 78%, from 11.7% to 20.8%, among US high school students reporting e-cigarette use from 2017 to 2018. And in the UK, 1.6% of those aged 11-18 use e-cigarettes more than once a week, compared with 0.5% in 2015. Vaping, which was actually intended as an aid to help smokers quit, developed into a trend among young people in the US, leading to nicotine addiction, even among those who had not smoked before.”

“We cannot allow an entire generation to become addicted to nicotine,” he said.

Prof Münzel and his colleagues investigated the effect of e-cigarette vapour on blood flow in the brachial artery in the upper arm in 20 healthy smokers before they vaped an e-cigarette and then 15 minutes afterwards. They also measured how stiff the artery became.

In addition, they exposed 151 mice to cigarette vapour over one, three or five days for 20 minutes six times a day.

They found that just one vaping episode increased heart rates and caused the arteries to stiffen and the inner lining of the arteries, the endothelium, to stop working properly in the smokers. The endothelium is responsible for maintaining the correct dilation and constriction of blood vessels, protects tissues from toxic substances and regulates inflammation and blood clotting processes. Endothelial dysfunction is involved in the development of cardiovascular disease.

Results from the mice showed that an enzyme called NOX-2 was responsible for damage to blood vessels, including those in the lungs and the brain, as a result of e-cigarette vapour. NOX-2 is involved in the body’s defences against bacteria and in a process called oxidative stress – an imbalance between free radicals and antioxidants in the body. Mice that were not able to produce NOX-2 were protected from the damaging effects of vaping.

Prof Münzel said: “The results of the present studies identified several molecular mechanisms whereby e-cigarettes can cause damage to the blood vessels, lungs, heart and brain. This is a consequence of toxic chemicals that are produced by the vaping process and may also be present at lower concentrations in the liquid itself. Importantly, we identified an enzyme, NOX-2, that mediated all the effects of e-cigarettes on the brain and cardiovascular system, and we found that a toxic chemical called acrolein, which is produced when the liquid in e-cigarettes is vaporised, activated the damaging effects of NOX-2. The beneficial effects of macitentan and bepridil indicate that e-cigarettes have the capacity to trigger constriction of blood vessels and to impair our cells’ antioxidant and survival systems.

“Our data may indicate that e-cigarettes are not a healthy alternative to traditional cigarettes, and their perceived ‘safety’ is not warranted. In addition, we still have no experience about the health side effects of e-cigarettes arising from long-term use. The e-cigarette epidemic in the US and Europe, in particular among our youth, is causing a huge generation of nicotine-addicted people who are being endangered by encouragement to switch from traditional cigarettes to e-cigarettes. Research like ours should serve as a warning about their dangers, and aggressive steps should be taken to protect our children from health risks caused by e-cigarettes.”

A limitation of the study was that no healthy non-smokers were included. However, the researchers point out that a strength is that they have received no funding from the e-cigarette industry.