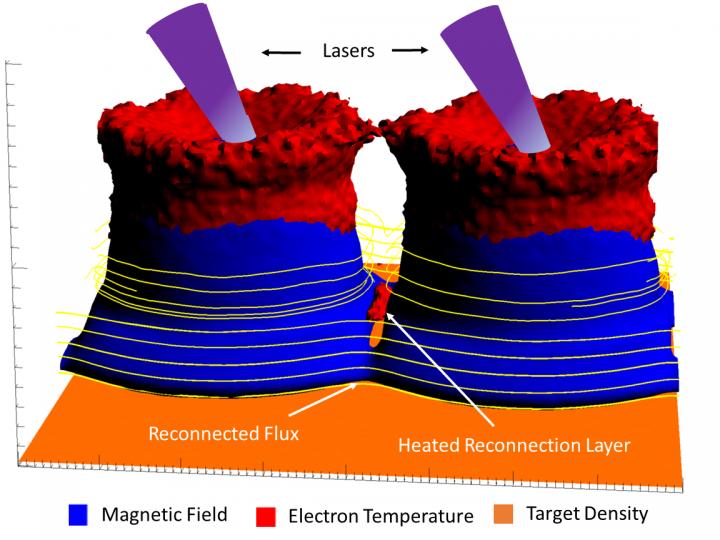 Magnetic reconnection, a process in which magnetic field lines tear and come back together, releasing large amounts of kinetic energy, occurs throughout the universe. The process gives rise to auroras, solar flares and geomagnetic storms that can disrupt cell phone service and electric grids on Earth. A major challenge in the study of magnetic reconnection, however, is bridging the gap between these large-scale astrophysical scenarios and small-scale experiments that can be done in a lab.

Researchers have now overcome this barrier through a combination of clever experiments and cutting-edge simulations. In doing so, they have uncovered a previously unknown role for a universal process called the “Biermann battery effect,” which turns out to impact magnetic reconnection in unexpected ways.

The Biermann battery effect, a possible seed for the magnetic fields pervading our universe, generates an electric current that produces these fields. The surprise findings, made through computer simulations, show the effect can play a significant role in the reconnection occurring when the Earth’s magnetosphere interacts with astrophysical plasmas. The effect first generates magnetic field lines, but then reverses roles and cuts them like scissors slicing a rubber band. The sliced fields then reconnect away from the original reconnection point.

The simulations modeled the results of experiments in China that studied high-energy-density plasmas – matter under extreme states of pressure. The experiments used lasers to blast a pair of plasma bubbles from a solid metal target. Simulations of the three-dimensional plasma (Figure 1) traced the expansion of the bubbles and the magnetic fields that the Biermann effect created, tracking the collision of the fields to produce magnetic reconnection. Researchers performed these simulations on the Titan supercomputer at the U.S. Department of Energy’s Oak Ridge Leadership Computing Facility at Oak Ridge National Laboratory.

The results “provide a new platform for replicating the reconnection observed in astrophysical plasmas in the laboratory,” said Jackson Matteucci, a graduate student in the Plasma Physics program at the Princeton Plasma Physics Laboratory who led the research.

By bridging the traditional gap between laboratory experiments and astrophysical processes, these results open a new chapter in efforts to understand the universe.