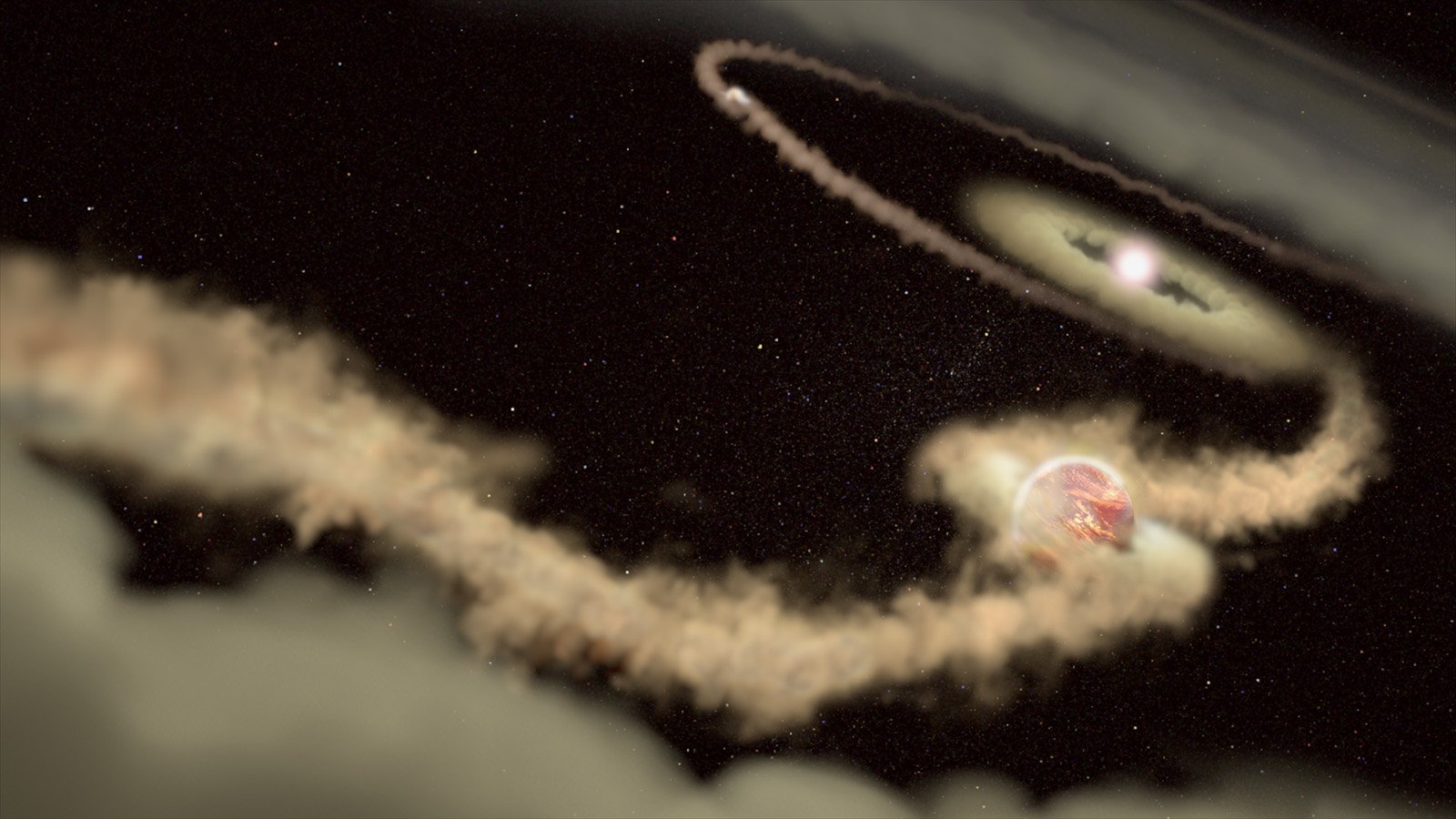 Astronomers have directly imaged two exoplanets that are gravitationally carving out a wide gap within a planet-forming disk surrounding a young star. While over a dozen exoplanets have been directly imaged, this is only the second multi-planet system to be photographed. (The first was a four-planet system orbiting the star HR 8799.) Unlike HR 8799, though, the planets in this system are still growing by accreting material from the disk. These results were published in the journal Nature Astronomy.

“This is the first unambiguous detection of a two-planet system carving a disk gap,” said Julien Girard of the Space Telescope Science Institute in Baltimore, Maryland.

The host star, known as PDS 70, is located about 370 light-years from Earth. The young 6-million-year-old star is slightly smaller and less massive than our Sun, and is still accreting gas. It is surrounded by a disk of gas and dust that has a large gap extending from about 1.9 to 3.8 billion miles.

PDS 70 b, the innermost known planet, is located within the disk gap at a distance of about 2 billion miles from its star, similar to the orbit of Uranus in our solar system. The team estimates that it weighs anywhere from 4 to 17 times as much as Jupiter. It was first detected in 2018.

PDS 70 c, the newly discovered planet, is located near the outer edge of the disk gap at about 3.3 billion miles from the star, similar to Neptune’s distance from our Sun. It is less massive than planet b, weighing between 1 and 10 times as much as Jupiter. The two planetary orbits are near a 2-to-1 resonance, meaning that the inner planet circles the star twice in the time it takes the outer planet to go around once.

The discovery of these two worlds is significant because it provides direct evidence that forming planets can sweep enough material out of a protoplanetary disk to create an observable gap.

“With facilities like ALMA, Hubble, or large ground-based optical telescopes with adaptive optics we see disks with rings and gaps all over. The open question has been, are there planets there? In this case, the answer is yes,” explained Girard.

The team detected PDS 70 c from the ground, using the MUSE spectrograph on the European Southern Observatory’s Very Large Telescope (VLT). Their new technique relied on the combination of the high spatial resolution provided by the 8-meter telescope equipped with four lasers and the instrument’s medium spectral resolution that allows it to “lock onto” light emitted by hydrogen, which is a sign of gas accretion.

“This new observing mode was developed to study galaxies and star clusters at higher spatial resolution. But this new mode also makes it suitable for exoplanet imaging, which was not the original science driver for the MUSE instrument,” said Sebastiaan Haffert of Leiden Observatory, lead author on the paper.

“We were very surprised when we found the second planet,” Haffert added.

In the future, NASA’s James Webb Space Telescope may be able to study this system and other planet nurseries using a similar spectral technique to narrow in on various wavelengths of light from hydrogen. This would allow scientists to measure the temperature and density of gas within the disk, which would help our understanding of the growth of gas giant planets. The system might also be targeted by the WFIRST mission, which will carry a high-performance coronagraph that can block out the star’s light to reveal fainter light from the surrounding disk and companion planets.