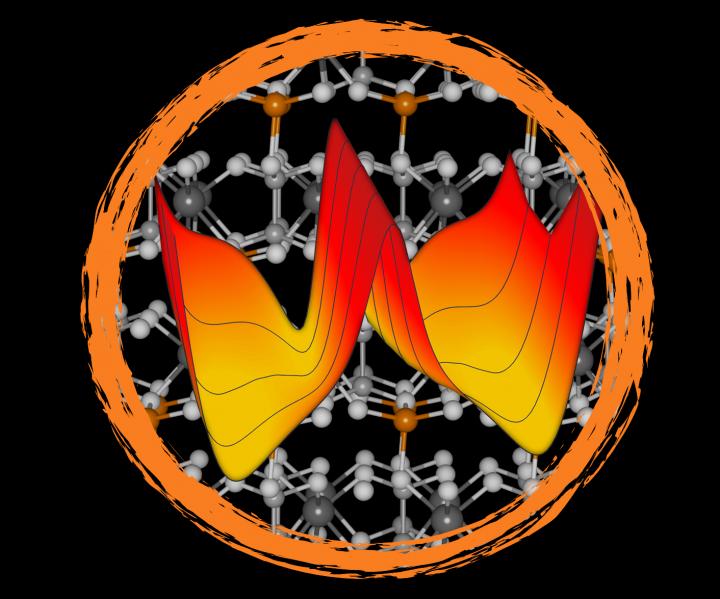 A scientific team from the Department of Energy’s Oak Ridge National Laboratory and Vanderbilt University has made the first experimental observation of a material phase that had been predicted but never seen. The newly discovered phase couples with a known phase to enable unique control over material properties – an advance that paves the way to eventual manipulation of electrical conduction in two-dimensional (2D) materials such as graphene.

The team made the discovery using a layered, copper-containing crystal that is ferroelectric, or has a constant electric dipole that can be reversed when an electric field is applied.

“These materials may become building blocks of ultrathin energy and electronics technologies,” said ORNL’s Nina Balke, a corresponding author of a paper reporting the finding in Nature Materials.

The observation shows properties that can be harnessed to provide materials with new functions. These properties depend on the locations of copper atoms in the crystal. The copper atoms can either sit within the layers of the crystal or become displaced into the gaps between layers – called “van der Waals gaps” – where they make weak ionic bonds with neighboring layers and form the new phase.

The scientists measured electromechanical responses throughout layered ferroelectric crystals of copper indium thiophosphate, or CIPS. This material is piezoelectric, meaning its surfaces become charged when it is stretched or squeezed. Conversely, applying an electric field makes a piezoelectric material expand or contract. The piezoelectric properties of CIPS were the key to studying it experimentally as well as theoretically to reveal the new phenomena.

The theoretical research was carried out by the group of Sokrates Pantelides, a professor at Vanderbilt University and distinguished visiting scientist at ORNL. Using quantum calculations, group members moved the atom responsible for polar displacement – copper – through the crystal structure and calculated the potential energy.

“A typical outcome for a ferroelectric material is that you have two energy minima, or ‘wells,’ for this atom; each one represents a polarization vector, one pointing up, the other down,” said Pantelides. “For this material, theory predicted four energy minima, which is extremely unusual.”

The research team found that the two additional energy minima arise from a second structural phase with double the polarization amplitude and with a stable position for the copper atom in the van der Waals gap. Moreover, the theoretically predicted piezoelectric constants for the two polar phases in CIPS matched the experimentally measured ones.

Sabine Neumayer, a member of the ORNL team, added, “The quadruple well opens up a lot of exciting opportunities, especially because we can control transitions between these four different polarization states using temperature, pressure and electric fields.”

Usually, ferroelectrics are thought of as switches between two states. In CIPS, four states are accessible.

Scientists worldwide have been racing to create an active interface for 2D materials like graphene, a single-atom-thick material with very high electron mobility.

“We imagine that in the future, an active interface to CIPS can control graphene via piezoelectric, ferroelectric and other responsive properties,” Maksymovych said. “It’ll put the smarts into graphene.”

“The competition and coexistence of multiple phases in the crystals makes these materials particularly exciting and interesting,” he said. “The ability to study complex materials like these both theoretically and experimentally over a wide range of length scales with complementary techniques makes this type of work possible at ORNL.”

The researchers ran experiments at ORNL’s Center for Nanophase Materials Sciences, where unsurpassed instrumentation and expertise enabled precise measurements and clear analysis and interpretation of complex data. The experiments relied on piezoresponse force microscopy (PFM) to image and control ferroelectric domains on scales of millionths to billionths of meters. A sharp conductive probe applies an electric field to a sample’s surface, and the material’s electromechanically induced deformation is inferred from the probe’s displacement.

“CNMS is the world-leading institution in piezoresponse force microscopy,” said Maksymovych. “People come here from across the world to measure properties of their samples.”

A big draw is close consultation with PFM group members providing nearly half a century of cumulative expertise from innovators in PFM such as Sergei Kalinin and Stephen Jesse, and top names in theory, such as Panchapakesan Ganesh and Sokrates Pantelides – all authors on this paper. “Without that longstanding expertise, the measurement itself alone might have not resulted in the cohesive picture we gained,” Balke said.

Maksymovych added, “Interpreting data for double wells is challenging. Quadruple wells are even more complex because now you have multiple switching properties. The sequence of expansion and contraction can look bizarre and unclear. Only due to Nina’s and Sabine’s effort was the bizarreness normalized so we could understand exactly what is going on.”

In future studies, the researchers will probe dynamic properties – observing ratios of high and low polarization in strained materials; moving, stabilizing and embedding atoms of the new phase to make a switch; experimentally probing predicted behavior of materials under pressure; and studying how ferroelectric domains reorient after an electric field is applied.