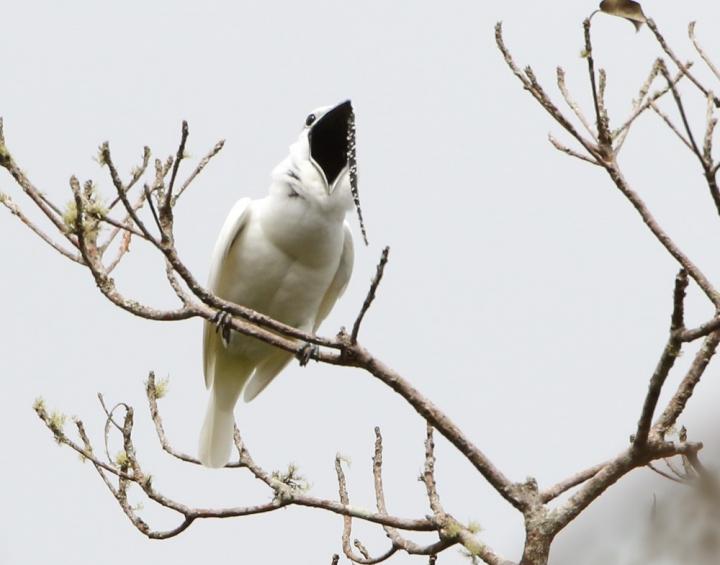 Researchers reporting in the journal Current Biology on October 21 have captured the loudest bird calls yet documented. The calls are the mating songs of male white bellbirds, which live atop mountains in the Amazon region of northern Brazil.

The calls have a sound pressure about three times that of screaming pihas, now the second loudest bird singer that’s been documented. In fact, the calls are so loud that the researchers are left to wonder how white bellbird females listen to them at close range without doing permanent damage to their hearing.

“While watching white bellbirds, we were lucky enough to see females join males on their display perches,” said Jeff Podos of the University of Massachusetts, Amherst. “In these cases, we saw that the males sing only their loudest songs. Not only that, they swivel dramatically during these songs, so as to blast the song’s final note directly at the females.”

“We would love to know why females willingly stay so close to males as they sing so loudly,” he says. “Maybe they are trying to assess males up close, though at the risk of some damage to their hearing systems.”

The researchers say it’s hard to describe just how loud the call really is because it’s tough to make comparisons between sounds heard at different distances. Podos says that the howls of howler monkeys and bellows of bison are well studied and are both pretty loud. But they are not nearly as loud as bellbirds. That’s especially impressive because of the bellbird’s tiny size in comparison to those mammals. Bellbirds weigh only about a quarter of a kilogram.

In several prior field expeditions in the Amazonian mountains, study co-author Mario Cohn-Haft from the Instituto Nacional de Pesquisas da Amazônia, Brazil, couldn’t help but notice the bellbirds. The birds had some intriguing anatomical features, including unusually thick and developed abdominal muscles and ribs. He suspected they might be related to singing. But a search of the scientific literature turned up empty. There was almost nothing known about the birds or how they sing.

So, Cohn-Haft and Podos decided to record their singing for themselves.

It was quite a surprise to find that white male bellbirds sing more loudly than any other known bird species, but the authors also learned that there’s a trade-off. As the songs of bellbirds and pihas alike get louder, they also get shorter in duration. The researchers suggest that’s because of limitations in the ability of the birds’ respiratory systems to control airflow and generate sound.

The discovery offers yet another example of the consequences of sexual selection. Sexual selection takes place when males compete for mates, driving the evolution of truly bizarre and exaggerated traits, including the peacock’s tail and now, it seems, the bellbird’s ridiculously loud singing. In future studies, Cohn-Haft says, he wants to further explore “the physical and anatomical structures and behaviors that allow bellbirds to produce such loud sounds and to endure them without hearing damage.”