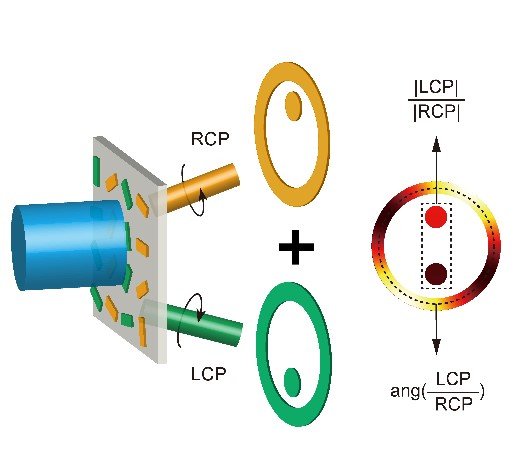 For the first time, researchers have used ultra-thin layers of 2D structures known as metasurfaces to create holograms that can measure the polarization of light. The new metasurface holograms could be used to create very fast and compact devices for polarization measurements, which are used in spectroscopy, sensing and communications applications.

Metasurfaces are optical elements with nanoscale features and an overall thickness that is less than 1/50th that of a human hair. They can be made with standard microelectronics fabrication techniques, enabling mass production, and can be easily integrated into wafer-scale optical systems. Despite these promising features, they are not yet used in many practical applications.

In Optica, The Optical Society’s journal for high impact research, a multi-institutional group of researchers report using metasurface holograms to effectively and quickly determine polarization at near-infrared to visible wavelengths. The new work represents a step toward functional metasurface-based devices to support a range of applications from telecommunications to chemical analysis.

“Holograms made from metasurfaces are an efficient and effective way to generate high-quality images with subwavelength resolution,” said research team leader Xueqian Zhang from Tianjin University, China. “Our work uniquely applies metasurface holograms to polarization measurements, which could enable camera-size devices that measure polarization in one step without moving parts.”

Although sunlight and most household light sources emit unpolarized light that oscillates in all directions, optical components such as filters can be used to produce polarized light that propagates in just a single plane – typically vertical or horizontal. Analytical instruments such as spectrometers can measure how light polarization changes after interacting with a material to determine its physical properties. Different light polarizations can also be used to send multiple signals through optical fibers for telecommunications applications.

Conventional methods for determining polarization often require multiple measurements, bulky optical setups or precise adjustment of high-quality optical components to indirectly determine the polarization state. In the new work, the researchers instead used a metasurface to determine polarization directly by comparing the amplitude and phase of light waves that are polarized at right angles to themselves.

“The overlapping images can be simply and quickly captured using a CCD camera,” said Zhang. “By analyzing the interference of the two holographic images, we can obtain the amplitude contrast and phase difference between the LCP and RCP components of the incident beam, thus identifying the polarization state.”

Key to the new technique was an algorithm called Gerchberg-Saxton, which is widely used in holographic research. The researchers figured out how to modify this algorithm so that it could be used to identify the phase difference between the LCP and RCP components of the incident light in the overlapping holographic images.

The researchers demonstrated their new metasurface holographic approach by using it to measure the polarization states of illuminating light beams with known polarizations. The measured polarization states matched well with the known ones, confirming the effectiveness of the approach. In the future, the metasurface could be incorporated into a camera’s photosensitive area to make a compact device for measuring polarization.

The metasurface the researchers used is based on the Pancharatnam-Berry phase (also known as geometric phase) method, which features relative phase responses that do not exhibit any dispersion. This allows the metasurface holograms to work over a broad range of wavelengths.

“Our method can be extended to many potential applications requiring polarization measurement, such as polarization spectroscopy, sensing and communications,” said Zhang. “Polarization-encoded holography could also be used for security information transmission because only a receiver who knows the desired polarization states could decode information from the final holographic images.”

Now that they have proved the concept, the researchers plan to improve the efficiency of the method and will compare its performance with conventional commercial instruments used to measure polarization.