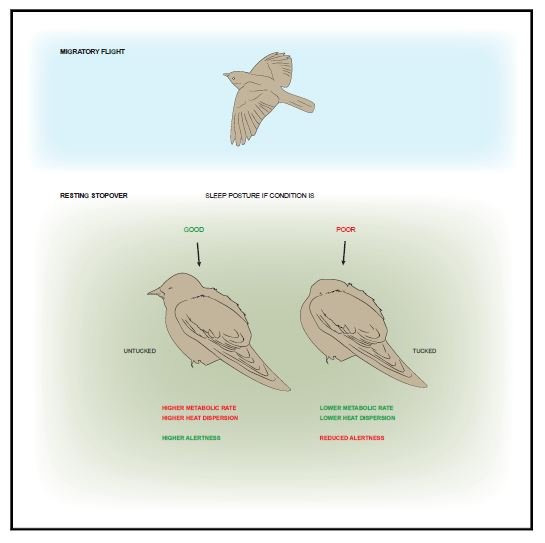 When driving across country, people can only make it so far before stopping off to rest. Likewise, most migratory songbirds must make stops during their long-distance journeys to sleep along the way. Now, researchers have evidence that songbirds tuck themselves in differently depending on just how worn out they really are.

As reported in the journal Current Biology on August 19, birds that are low on fat reserves will tuck their heads under their feathers for a deep snooze. They do so despite the fact that this more restful sleeping position slows their reaction to the sound of potential trouble. By comparison, birds in better shape stop and sleep with their head facing forward, untucked, and more alert.

“We discovered that migratory birds trade off safety for lower energy expenditure,” said Leonida Fusani of the University of Vienna and University of Veterinary Medicine, Austria.

“If they sleep with their head tucked in the scapular feathers, they enter a sort of deeper sleep that is associated with lower energy consumption but exposes them to a higher predation risk. Consequently, birds in good condition sacrifice some energy to sleep more safely with the head untucked, whereas birds in poor condition sacrifice vigilance to save energy while sleeping unsafely tucked in.”

Fusani and colleagues, including Andrea Ferretti, Massimiliano Cardinale, Scott McWilliams, Niels Rattenborg and Thomas Ruf, wondered how small migratory songbirds cope with sleep deprivation. To find out, they analyzed the sleeping patterns of Garden Warblers at a stopover site in the Mediterranean.

The researchers went on to show that sleeping with the head tucked is associated with lower respiratory and metabolic rates. By hiding the head, the birds lose less heat. But the benefit of conserving energy while sleeping with the head tucked is countered by reduced vigilance. When the researchers presented those birds with the sound of crunching leaves, they were slower to respond than birds whose heads faced forward.

“We did not expect to find such a strong difference between the two sleeping postures in terms of metabolic rate – the amount of energy required to fuel the bird’s physiological functions,” Ferretti said.

“Although there was good reason to think that birds reduce heat loss by tucking their heads in their feathers, we were surprised to see that they actually reduce their alertness when sleeping in this position.”

Fusani says that the findings suggest that migratory songbirds may benefit from stopover habitats that not only provide sufficient food, but are also conducive to undisturbed sleep. His team will continue to study the physiological basis of birds’ decision making during migration, noting that little is known beyond navigation or migratory routes.

“Migratory songbirds appear to be very well suited for studying the role of sleep in both brain and body maintenance,” Ferretti says.