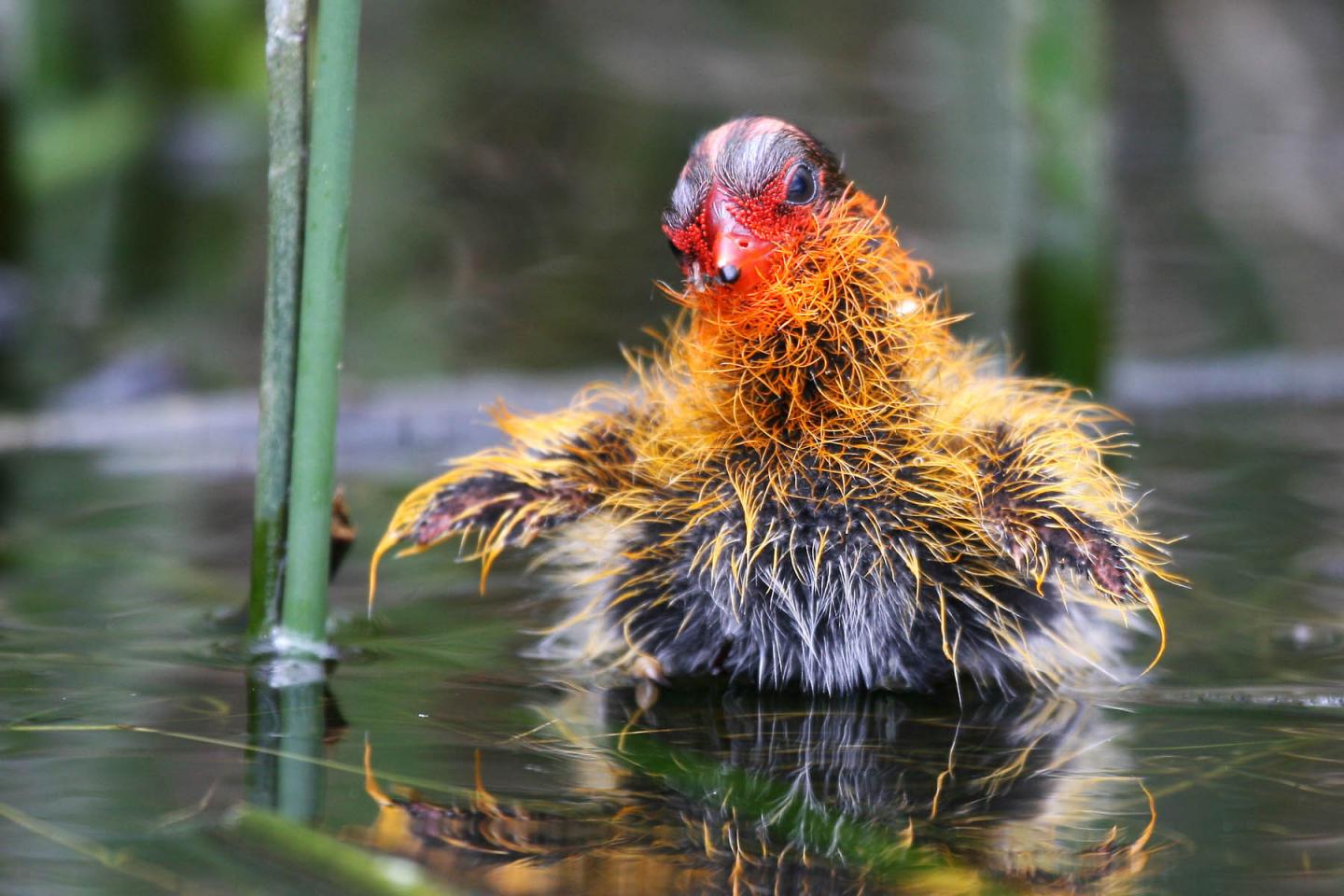 The American coot is a somewhat drab water bird with gray and black feathers and a white beak, common in wetlands throughout North America. Coot chicks, however, sport outrageously bright orange and red feathers, skin, and beaks. A new study explains how the bright coloring of coot chicks fits in with the reproductive strategy of their less colorful parents.

Previous research had shown that coot parents preferentially feed the brightly ornamented chicks over those whose plumage has been manipulated to be less colorful, giving the ornamented chicks a survival advantage. This parental preference within families can drive the evolution of ornamentation in the offspring, just as female mate choice can result in ornamented males in the context of sexual selection (peacocks being the classic example of that).

Left unresolved by the earlier research, however, was why coot parents would have a preference for ornamented chicks in the first place, and whose fitness interests are served by the ornamentation, said Bruce Lyon, professor of ecology and evolutionary biology at UC Santa Cruz and first author of the new study, published December 30 in Proceedings of the National Academy of Sciences.

“It’s an interesting question, because there are theories about conflicts of interest between parents and offspring suggesting that it could be the chick manipulating the parents to get more food,” Lyon said. “Having shown that the parents really care about the ornamentation, we focused in this study on the natural variation in chick coloring.”

At their field sites in British Columbia, Lyon and coauthor Daizaburo Shizuka from the University of Nebraska-Lincoln were already conducting studies that involved collecting eggs from coot nests and hatching them indoors. Using a photospectrometer, they were able to get precise color measurements of almost 1,500 coot chicks. For every chick, they knew the family it came from, the egg laying and hatching order, and in many cases whether or not it was a parasitic egg.

“We thought the parasitic chicks might be more colorful to gain an advantage,” Lyon said. “Instead, we found that the parasites are actually less colorful. That was a bit of a shock.”

“That tells us the chicks can’t be controlling their coloration, because they don’t know where they are in the laying order. This is a maternal effect, presumably due to the mom putting more carotenoid pigments in the later eggs,” Lyon said.

So why would coot mothers want to mark their chicks in this way? The answer has to do with the American coot’s brutally harsh reproductive strategy. Coots lay a lot of relatively small eggs, producing more chicks than the food supply can support in most years. As a result, chick mortality is extremely high, with about half of each brood dying of starvation.

“It’s very efficient for coots, because their eggs are not very costly to produce. By laying an optimistic clutch size and then culling the brood to bring it in line with the food supply, they’re always raising as many chicks as they can,” Lyon said.

The culling takes place mostly during the first ten days after the eggs hatch, when the parents do not show any feeding preferences and feed whichever chick reaches them first when they have food. The first chicks to hatch get a head start on growth, so most of the mortality is among the later hatched chicks.

Everything changes, though, at about ten days after the last chick hatches. At that point, the parents start controlling food allocation to make sure the remaining runts in the brood get enough food to survive. Each parent chooses a favorite who gets preferential feeding, and these favored chicks are the most colorful, later-hatched chicks. Their larger, early-hatched siblings, meanwhile, endure a form of parental aggression called tousling (shaking them by the back of the neck) to keep them from hogging too much food. The favored chicks are initially much smaller than their siblings, but the extra feeding allows them to catch up and sometimes exceed the others in body mass.

“The male and female divide up the brood, with each parent exclusively feeding their half of the brood, and each parent also picks a favorite. Color predicts which one they choose, so the ornamentation may serve as a signal to tell them which chick needs the most help,” Lyon explained. “They start by creating an uneven playing field, which allows them to cull the brood, and then they intervene to level the field. The orange plumage seems to be a feature that helps them do that.”

The effect of laying order on coloring also explains why the parasitic eggs are less colorful. The eggs a female lays in a stranger’s nest are the first ones in her laying sequence, so they get the least pigment. The parasitic egg-laying behavior is opportunistic, so the female may not know when she’s forming an egg whether she will be laying it in her own nest or someone else’s.

“They’re complicated birds. For over 20 years, we’ve been chipping away at understanding their reproductive behavior, and this is another interesting aspect of that,” Lyon said.

Lyon described parental preferences for ornamented chicks in a 1994 Nature paper, and he and Shizuka described coot parents’ food allocation strategies in a 2013 Ecology Letters paper.

The new work was supported by the National Science Foundation, the National Geographic Society, the Chapman Fund, and the Sigma Xi Society.