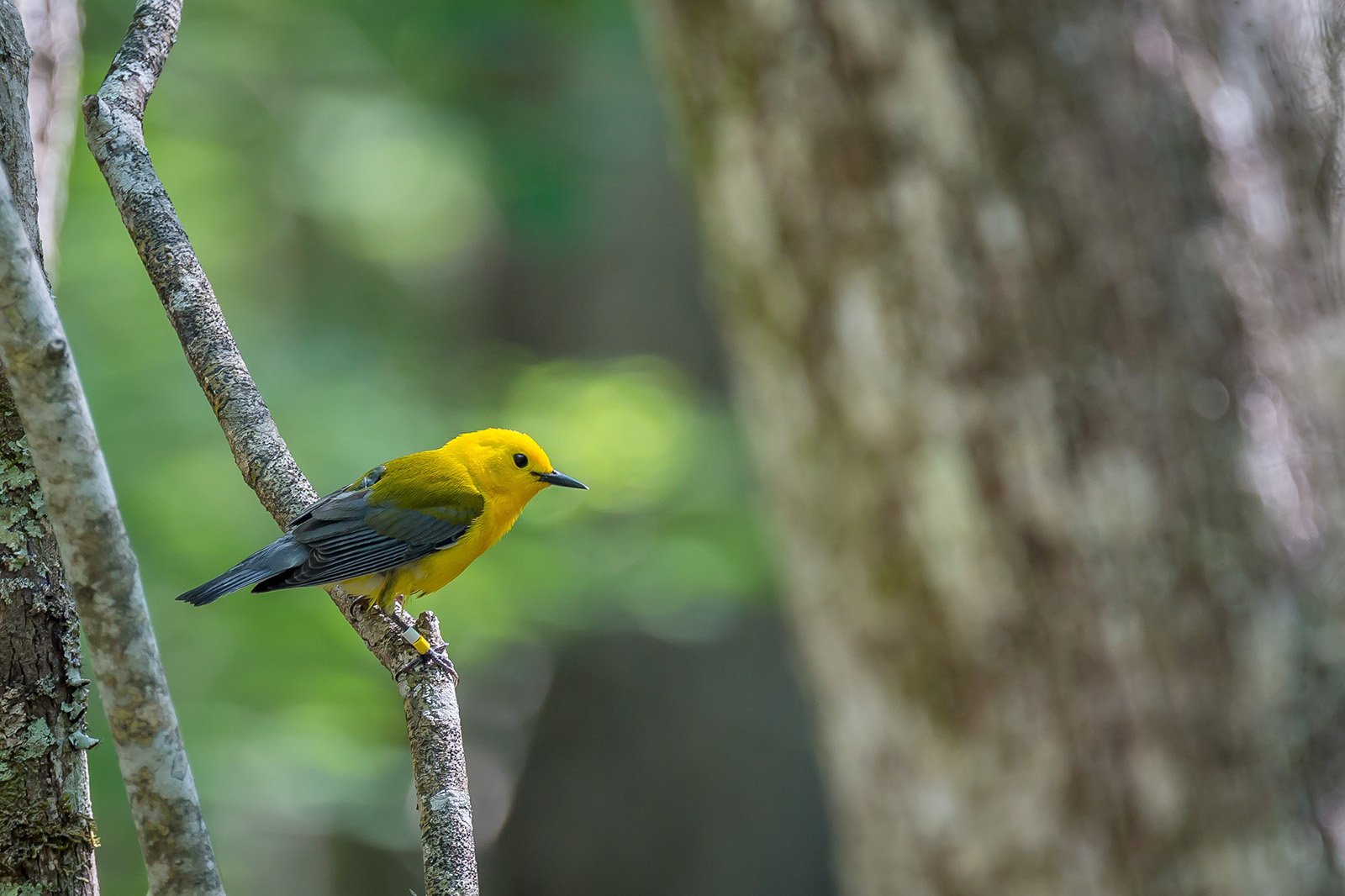 Many of North America’s migratory songbirds, which undertake awe-inspiring journeys twice a year, are declining at alarming rates. For conservation efforts to succeed, wildlife managers need to know where they go and what challenges they face during their annual migration to Latin America and back. For a new study published by The Condor: Ornithological Applications, researchers in six states assembled an unprecedented effort to track where Prothonotary Warblers that breed across the eastern U.S. go in winter – their “migratory connectivity” – and found that nearly the entire species depends on a relatively small area in Colombia threatened by deforestation and sociopolitical changes.

The Ohio State University’s Christopher Tonra and his colleagues coordinated the deployment of 149 geolocators, tiny devices that use the timing of dawn and dusk to estimate birds’ locations, on Prothonotary Warblers captured at sites across their breeding range. When the birds returned to their nesting sites the following year, the researchers were able to recover 34 devices that contained enough data for them to use. The geolocator data showed that regardless of where they bred, most of the warblers used the same two major Central American stopover sites during their migration and spent the winter in a relatively small area of northern Colombia. Additionally, many Prothonotary Warblers appeared to winter in inland areas, rather than in coastal mangrove habitat, which previous studies suggested they relied on most heavily.

These unexpected findings show that we may not understand the winter habitat needs of migratory songbirds as well as we thought. “The most surprising thing about the results was the overwhelming importance of Colombia to this species,” says Tonra. “We weren’t sure what to expect in terms of migratory connectivity, but we never expected that nearly every bird would use the same wintering region. This provided a clear conservation message and shows the power of geolocators in addressing gaps in our knowledge of migratory songbirds.” Colombia’s 50-year civil war accelerated deforestation in the region of the country where the warblers are concentrated, but the good news is that the convergence of birds in this single area means that conservation efforts targeted here could benefit breeding populations across North America.

Collecting data on birds across such a broad geographic area required close collaboration among the study’s thirteen coauthors. “This was very much a team effort, but it really started with Erik Johnson at Audubon Louisiana and Jared Wolfe with the Louisiana Bird Observatory,” says Tonra. “Erik founded and leads our Prothonotary Warbler Working Group, and he initiated the idea of deploying tags across their range. This was an extremely rewarding example of what you can accomplish through collaboration across the range of a species of concern. Everyone put in an enormous effort to gather data in their region, as well as contributing to the preparation of the paper.”