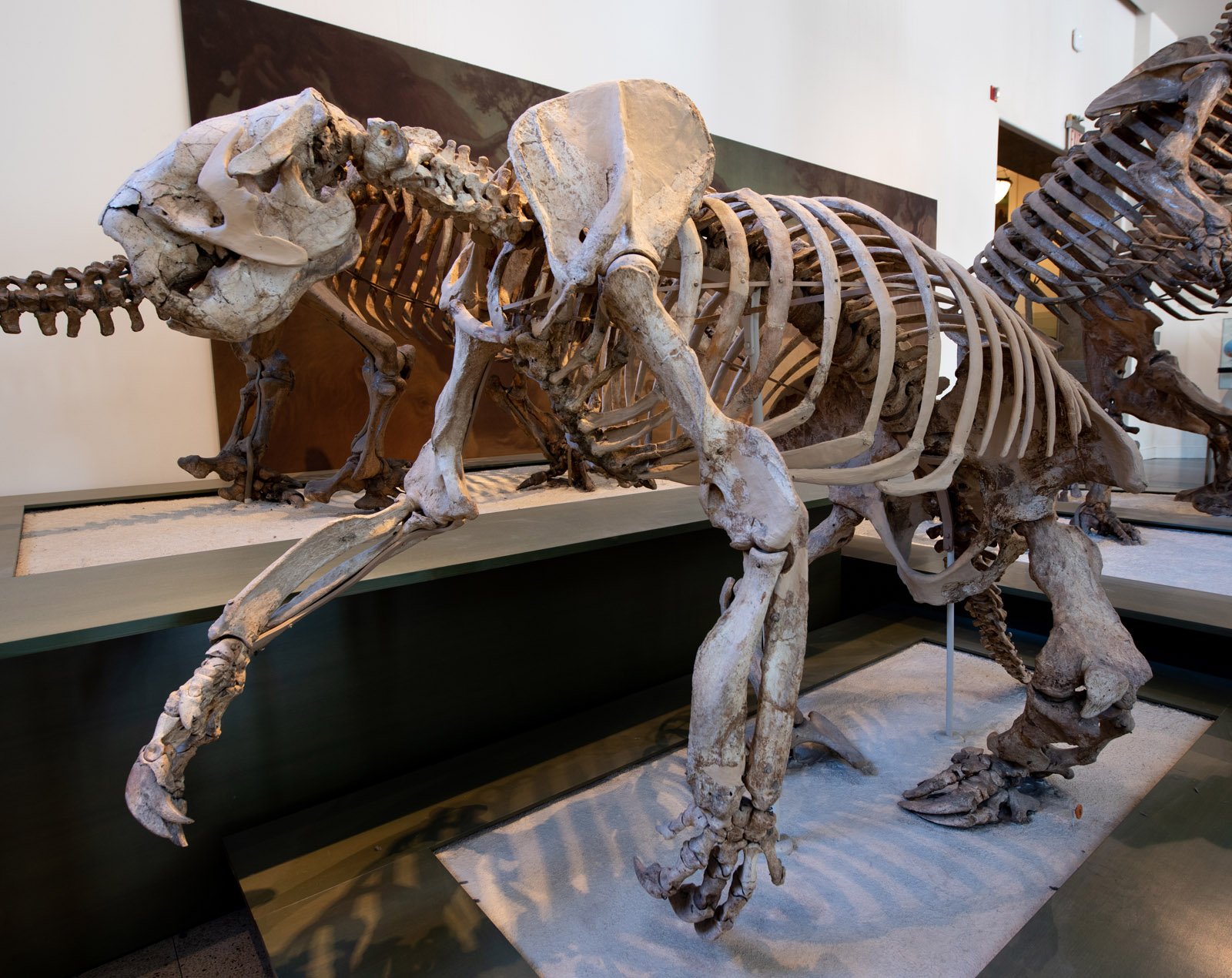 New studies by two research teams published today in the journals Nature Ecology and Evolution and Current Biologychallenge decades of accepted scientific opinion concerning the evolutionary relationships of tree sloths and their extinct kin. The research teams used different molecular tools–the protein collagen in one case and the mitochondrial genome in the other–but they reached nearly the same results. The concurrent findings are significant because they provide molecular evidence that appears to overturn a longstanding consensus, based on the study of anatomical features, regarding how the major groups of sloths are related to one another.

Corresponding authors Ross D. E. MacPhee of the American Museum of Natural History and Frédéric Delsuc of the French National Centre for Scientific Research (CNRS) at the University of Montpellier noted that, although their research groups worked separately, they were in communication.

“All of us were initially surprised by our results because they thoroughly contradicted what seemed to be the accepted view based on anatomy,” said Delsuc.

“Exceptional results demand exceptional verification,” continued MacPhee, a curator in the Museum’s Department of Mammalogy, “That’s why we arranged with the journals to publish our papers simultaneously, to emphasize that corroboration is a crucial part of good science.”

To undertake their work, the teams had to collect molecular information not only from the two kinds of living tree sloths–the unau, in the genus Choloepus (also known as two-toed sloths) and the ai, in the genus Bradypus (three-toed sloths)–but also a wide range of extinct forms, including the large ground sloths, which can be seen on exhibition in many natural history museums. Delsuc’s team targeted the DNA housed in mitochondria, the cellular “energy engines” that exist in large numbers in the body’s tissues and can be recovered using ancient DNA capture methods from well-preserved fossil material. Compared to the nuclear genome, however, the information that the mitochondrial genome contains is limited and may sometimes be incongruent with evolutionary history.

Importantly, findings from the other team’s study, which analyzed the protein collagen, closely agreed with the mitochondrial study. Paleoproteomics, or the utilization of protein evidence for taxonomic purposes, is a relatively new field, but type 1 (“bone”) collagen has become an increasingly important source of information in mammalian paleontology, for two reasons: it degrades more slowly than DNA, and it can be found in large amounts in well-preserved fossils because it makes up 80-90 percent of the organic fraction of bone. The genes providing the instructions for the synthesis of bone collagen reside in the nucleus, and because of the precise relationship between the building blocks of a given gene and the protein for which it codes, the protein’s amino acids reflect information present in the gene at the DNA level. Thus, between them the two studies sampled both parts of the genome, nuclear as well as mitochondrial.

“Structural proteins like collagen potentially last much, much longer after death than the relatively fragile DNA molecule,” said Samantha Presslee, the lead author on the Nature Ecology and Evolution paper and a doctoral student at the University of York. “This means that scientists can extract and interpret protein evidence from a wide range of extinct species well beyond the current reach of ancient DNA.”

Other proteomic investigations have reported high-quality collagen from specimens as old as 3.8 million years, from an island in the Canadian Arctic. In the case of the sloth study, the oldest successful recovery was from a fossil between 120,000 and 400,000 years old; older specimens were tried but did not yield useful information.

“Having the results of both sources of molecular information in front of us, we knew that we were standing on solid ground, and that it was time to revisit sloth evolution and classification,” said Hendrik Poinar of the Ancient DNA Centre at McMaster University, who was also a corresponding author on the mitogenomic paper.

With their long arms, hook-like claws, and upside-down locomotion the six species of living tree sloths seem remarkably similar, but research has shown that they gained their adaptations for life in the trees independently through a phenomenon known as evolutionary convergence. Convergent origins were also supported by the molecular investigations, but most other inferences about sloth evolutionary relationships were not. For example, the ais (three-toed sloths) have long been regarded as being so anatomically different from other sloths that they were classified on a completely separate evolutionary branch. Both the mitochondrial and protein evidence indicate that this view is not correct: Bradypus folds well within Megatherioidea, a group that also included the largest of all sloths, the elephant-sized giant ground sloth Megatherium. Similarly, the unaus (two-toed sloths) were found to be members of another major group called the mylodontoids, although they had previously been placed in Megalonychidae, a family originally defined to include the extinct North American ground sloth Megalonyx and a number of island species that lived in the West Indies until a few thousand years ago.

Each team also attempted molecular dating to interpret their evidence in the context of the sloth fossil record in order to make predictions about when the different major groups separated from one another. This led to another major surprise: the combined molecular evidence suggests that the West Indian sloths, known as megalocnids, diverged from the ancestor of both megatherioids and mylodontoids more than 30 million years ago. The first sloths to reach the Greater Antilles may have entered over a temporary land connection between these islands and South America. In taxonomic terms, that makes them the closest relatives or sister group of all other sloths, whereas they had previously been regarded as a minor, late-evolving group within the megatherioid radiation. Another finding at odds with traditional taxonomy is that Megalonyx, previously thought to be a close relative of the unau (two-toed sloth), appears to be more closely related to the ai (three-toed sloth).

“The combined molecular results are surprising on many levels,” said Graham Slater, an assistant professor of geophysical sciences at the University of Chicago, who was involved in the protein paper. “Not only do they rewrite sloth classification, they suggest much of what we thought we knew about how sloths evolved may be wrong. We’ve been used to thinking that today’s sloths evolved independently for life in the trees from a ground-dwelling ancestor, but our results suggest that the basal, or ancestral, sloth may have been at home in both.”

One reason for this thinking is that most of the West Indian sloths appear to have been highly arboreal, with some showing adaptations quite similar to those of the living tree sloths.

“Although the molecular results conflict with current paleontological views based on anatomical features, there can be only one history of life,” said MacPhee.

“The job now is to reconcile these differing methods of inference, which means a lot more work on everyone’s part. We are going to learn a lot, and that’s exciting.”

The paleoproteomic investigation was supported by the U.S. National Science Foundation, under grant #s OPP 0636639 and DEB 1547414. The mitogenomic investigation was supported by grants from the French National Centre for Scientific Research (CNRS), the University of Montpellier (UM), the French National Research Agency (CEBA, ANR-10-LABX-25-01; CEMEB, ANR-10-LABX-0004; GAARAnti, ANR-17-CE31-0009), the Natural Sciences and Engineering Research Council of Canada (NSERC, no. RGPIN04184-15), and the Canada Research Chairs programme.

“Until recently, extinct organisms could only be included in genealogical analyses of living organisms by using data based on their morphology or appearance,” said Simon Malcomber, a program director at the National Science Foundation, which funded the paleoproteomic research. “This research shows how the combined molecular analyses of extinct and living relatives can provide surprising–and exciting–new insights into how life on Earth has evolved. These new extraction methods open the door to fresh examination of relationships between living and extinct organisms, and how the diversity of life has changed over time.”