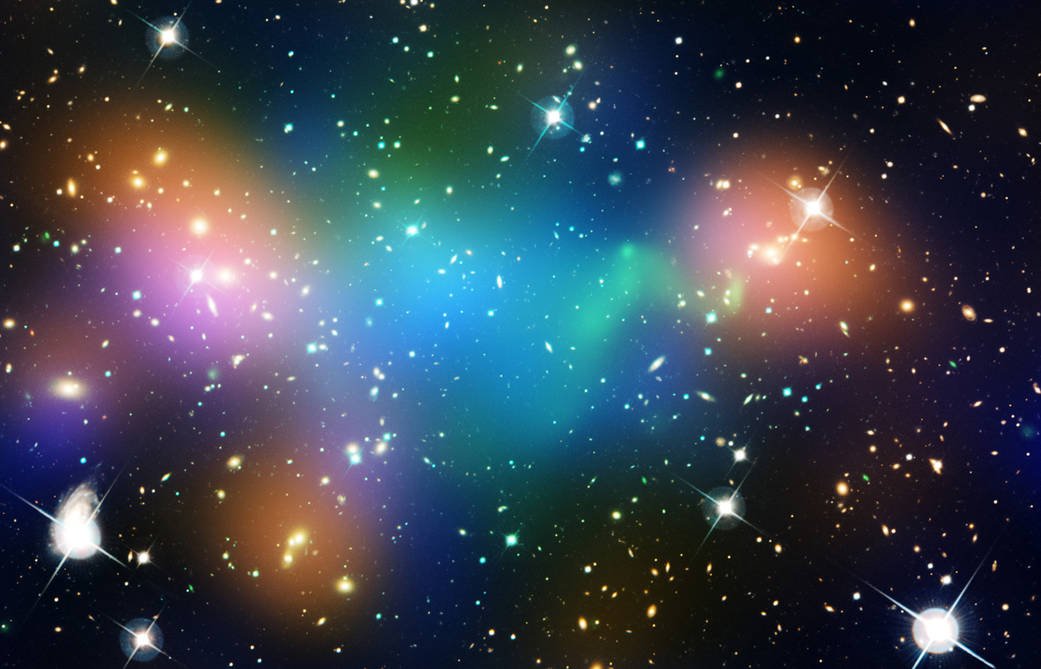 Researchers in Korea reported in 2019 June 24th issue of Nature Astronomy that a giant smash of two clusters of galaxies can form bar structure, an important structure inside many spiral galaxies.

It has been known that galaxies, systems made of hundreds of billions of stars, can take many different shapes. The reason why galaxies take many different shapes has been one of the most important questions in Astronomy during the past 100 years. The most common kind of galaxies is spiral galaxies that have spiral arms, and about one third of spiral galaxies are known to have a structure called “bar”. Bar structure is an elongated structure that extends from the central region of a galaxy, and bar has been known to play a key role in regulating star formation and nuclear black hole growth. Furthermore, bar has been suggested as a structure responsible for forming another important galactic structure called “bulge”, a central concentration of stars in elliptical shape.

Therefore, the formation mechanism of bar has been a central issue for understanding the galaxy formation and evolution. Previous studies have suggested two key mechanisms for bar formation, one that is driven by the internal dynamical instability of galaxies (internal mechanism), and another due to interaction of a galaxy with other galaxies in the neighbor (environmental mechanism). However, the exact physical mechanism for the bar formation has been in debate.

In this new study, the research group led by Prof. Myungshin Im and Mr. Yongmin Yoon at Seoul National University identified a completely new mechanism that can form bars in spiral galaxies – interaction of two galaxy clusters. Galaxy clusters are the most massive gravitationally bound objects in the universe, that are made of hundreds to thousands of galaxies. When such massive monsters collide with each other, the colliding system exerts a rapid and strong change in the gravitational force on galaxies that belong to the clusters. This rapid change of the gravitational force can induce instability in spiral galaxy structure and causes bars to form.

The discovery is rather unexpected, and provides a fresh, new view on how galaxy shape are determined. When studying galaxy shapes, previous studies focused on internal physical parameters such as galaxy mass or static environmental parameters such as mass density of the environment. However, the new result suggests that the rapid and violent change of the large scale environment such as galaxy cluster interaction must be additionally considered seriously when understanding galaxy shapes. Myungshin Im notes that “This result provides a very new perspective to the study of galaxy shapes, and could galvanize this field.”

The bar structure may not be the only thing that has been induced by galaxy cluster interaction. Other physical properties of
galaxies, such as how strongly they form stars, could be affected as well. “We are now looking into how galaxy cluster interaction changes many other properties of galaxies.”, Yongmin Yoon adds. Just like human society, violent change in the environment at large scale seems to change the lives of galaxies in the universe.

This research was supported by the National Research Foundation of Korea.