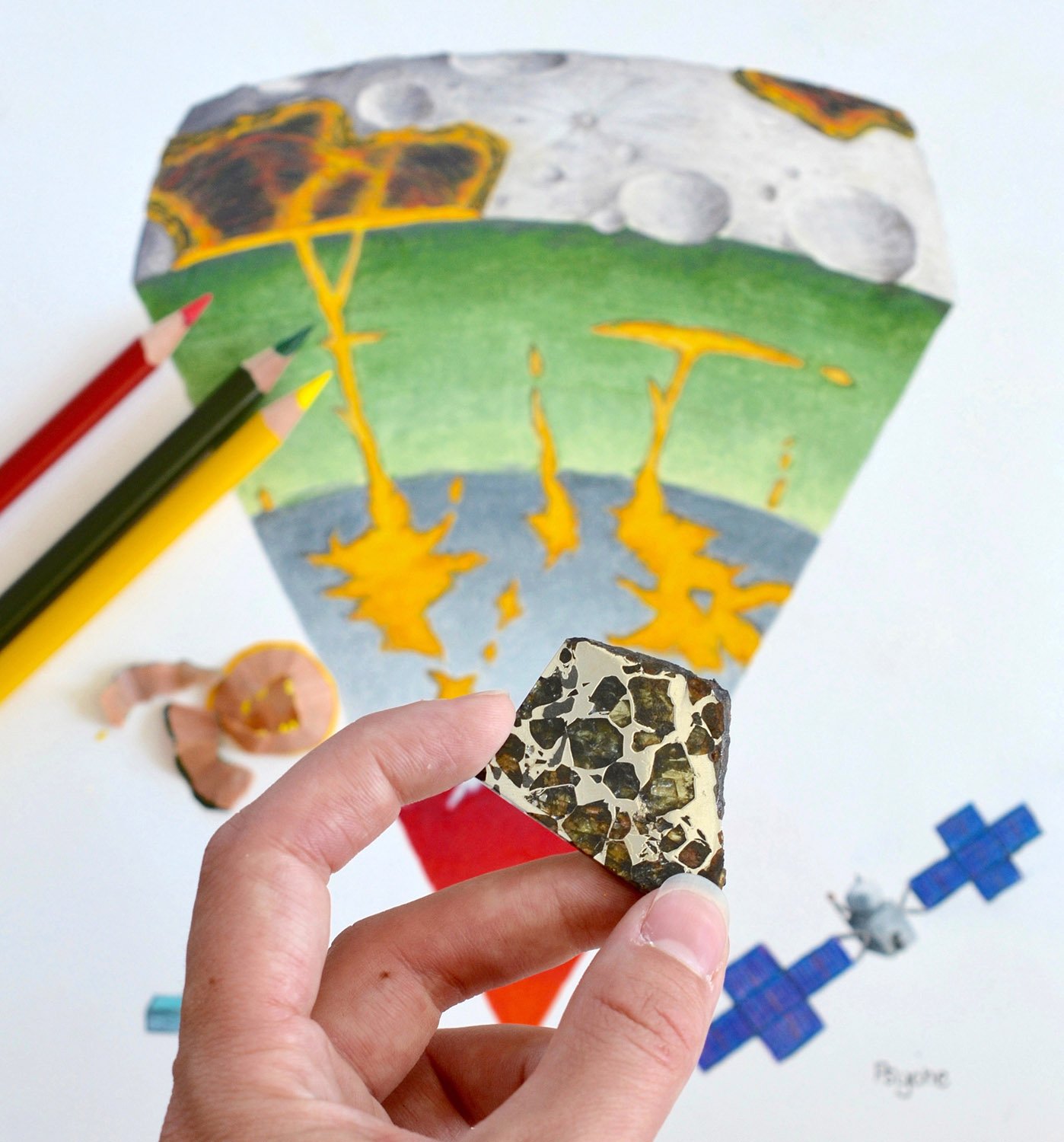 The metallic asteroid Psyche has mystified scientists because it is less dense than it should be, given its iron-nickel composition. Now, a new theory could explain Psyche’s low density and metallic surface.

Unlike most asteroids, Psyche appears to be composed largely of iron and nickel instead of rocky rubble. Metal-rich asteroids are thought to have formed when primordial planetesimals collided, stripping away much of the outer material and leaving behind the inner metallic cores, which then cooled and solidified from the outside-in. During this cooling process, an alloy of residual melted pockets of iron, nickel and lighter elements like sulfur, might have flowed to the surface through fluid-filled cracks called dikes, coating a topmost, rocky layer.

“We refer to these processes collectively as ‘ferrovolcanism,’” said Brandon C. Johnson, an associate professor of earth and atmospheric sciences at Purdue University.

The theory is detailed in a research paper appearing in the journal Nature Astronomy on September 16th 2019. The paper was co-authored by Johnson; Michael M. Sori, an associate staff scientist at the University of Arizona’s Lunar and Planetary Laboratory; and Alexander J. Evans, an assistant professor of earth, environmental, and planetary sciences at Brown University.

Meteorites called pallasites are thought to be a mixture of core and mantle material, possibly blended together by ferrovolcanism. The pockets of liquid metal, mixed with sulfur, are less dense than surrounding solid material, producing an “excess pressure,” possibly causing the propagation of dikes and allowing ferrovolcanism to occur.

The researchers determined how far these dikes would have to propagate to make volcanism possible.

“Our calculations suggest that ferrovolcanic eruptions may be possible for small, metal-rich bodies, especially for sulfur-rich melts and bodies with mantles thinner than about 35 kilometers or bodies where the mantle has been locally thinned by large impact craters,” Johnson said.

An upcoming NASA space mission to Psyche will help scientists test this theory. The ferrovolcanic eruptions might explain Psyche’s low density, which exists despite radar and other scientific evidence of a metallic surface composition. Psyche, the largest known metallic asteroid in the solar system, is located in the asteroid belt between Mars and Jupiter. Its density is estimated to be only about half that of an iron meteorite.

The researchers theorize that the asteroid might consist of two layers, where a metal core is surrounded by a lower density mantle of rocky material.

“Ferrovolcanism may have transported core material to the surface, causing the radar detections of metal,” Johnson said.

The research is ongoing, with future work harnessing more sophisticated modeling to study how ferrovolcanism might occur, and possibly probing Psyche’s evolution. No spacecraft has yet to visit a metallic asteroid, and the concept of ferrovolcanism is based on mathematical models. NASA plans to launch the space probe in 2022. The mission could allow scientists to confirm the theory and answer questions about the role of metallic asteroids in the evolution of the solar system.