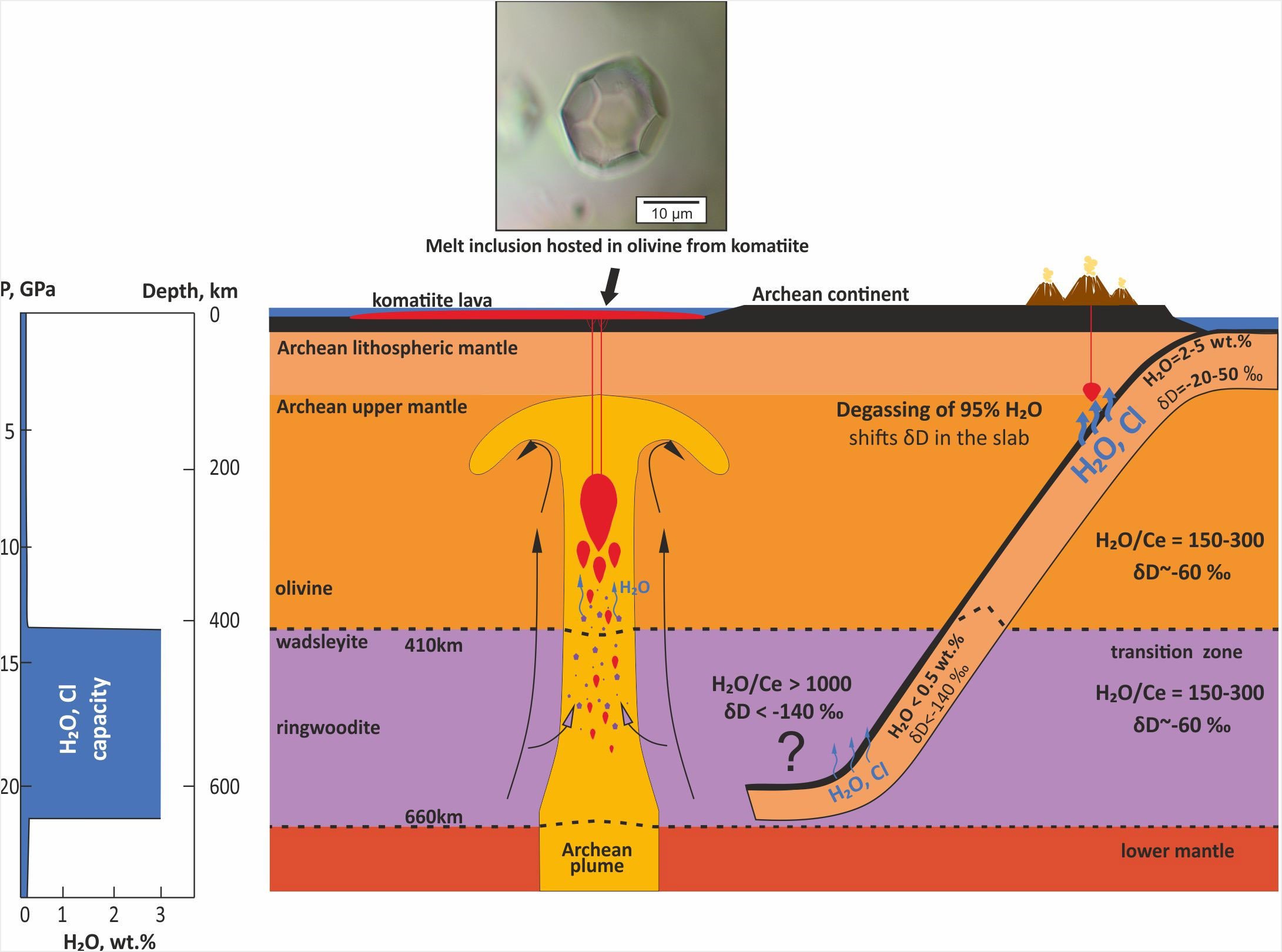 Global recycling of oceanic crust from the surface of Earth down to the deep mantle and then back to the surface is one of the major features of the plate tectonic regime that makes our planet unique in the Solar system. Just when this process started during the 4.5 billion years of Earth history is a subject of long-standing debate. In a new paper published in Nature (Sobolev et al, 2019), an international team from France (UGA, ISTerre, Grenoble and CRPG, CNRS, Nancy), Russia (Vernadsky Institute, Russian Academy of Sciences, Moscow), Germany (GEOMAR and Kiel University), South Africa (University of the Witwatersrand, Johannesburg) and USA (Louisiana State University) presents geochemical evidence that global recycling started much earlier than expected by many scientists – sometime in the first billion years of Earth history.

In the early 2000s, Wilde et al., (2001) and Mojzsis et al. (2001) demonstrated that seawater has been present at the Earth surface since 4.4 billion years ago. The reaction of seawater with crustal rocks produces hydrous minerals such as serpentine that contain chlorine. When such minerals are transported into the deep mantle, rising pressure and temperature causes them to dehydrate; i.e., to lose much of their H2O and chlorine and transform to other less hydrous minerals. The H2O and Cl that remains in such minerals, however, are still an order of magnitude higher than in the typical mantle minerals. Also, during dehydration, deuterium (D), the heavy isotope of hydrogen, leaves the rock in escaping aqueous fluid while the light isotope of hydrogen (1H) stays in the mineral structure. This changes the isotopic composition of hydrogen and dramatically decreases the D/1H ratio of dehydrated rocks. Therefore, the transport of crustal rocks to the deep mantle should introduce a unique chemical signature: elevated contents of chlorine and water, and hydrogen isotope composition depleted in deuterium.

Mantle-derived melts are the best probes of the composition of terrestrial mantle, including its H2O and chlorine contents. Komatiites are very hot magmas that erupted mainly in the Archean and are produced by an unusually high proportion of melting of the mantle, and best represent the composition of their source (Arndt et al, 2008). All samples of komatiite have been altered by a postmagmatic process and do not retain information on volatile elements like H2O and Cl. But these rocks contain relicts of the mineral olivine (magnesium-iron silicate), which in turn contains inclusions of melt that was trapped during its crystallization. These inclusions, which are only a few tens of micrometers in size, keep full information on the composition of Archean melts, including their chlorine and H2O contents and D/1H ratios. To recover this information, one has first to homogenize these inclusions by melting and quenching them at high temperature to produce pure glass, then analyze them for chemical and isotope composition using sophisticated instruments such as the electron microprobe, laser-source mass spectrometers, and ion microprobe.

In 2016, an international group led by ISTerre scientists studied melt inclusions in olivine from 2.7-billion-year-old komatiites from Abitibi Belt in Canada (Sobolev et al., 2016). They obtained the first analyses of the concentrations of water and mobile elements (Rb, Ba, Cl, Pb, Sr) in komatiite melt and used these results as evidence of elevated water and chlorine contents deep in the mantle during the Neoarchean. They postulated the existence of a deep reservoir in the mantle containing a few thousands of parts per million of water in high-pressure polymorphs of olivine. This water may have accumulated during the primordial accretion of the Earth or by early subduction of seawater altered crust that became trapped in the transition zone.

In the new paper in Nature (Sobolev et al., 2019) the same group reports their study of melt inclusions in olivine from older komatiites, 3.3 billion years, from the Barberton Belt in South Africa. They show that the deep hydrated reservoir has been present in the Earth at least since the Paleoarchean, 600 million years before it was known previously. They also resolved the ambiguity concerning its origin using the first data for the hydrogen isotope composition of Archean melts. The D/1H ratios of inclusions in Barberton Belt olivines are very low and therefore consistent with dehydrated ocean crust. Together with elevated H2O and chlorine contents, these results argue that recycling into the mantle of seawater-altered crust started before 3.3 billion years ago.