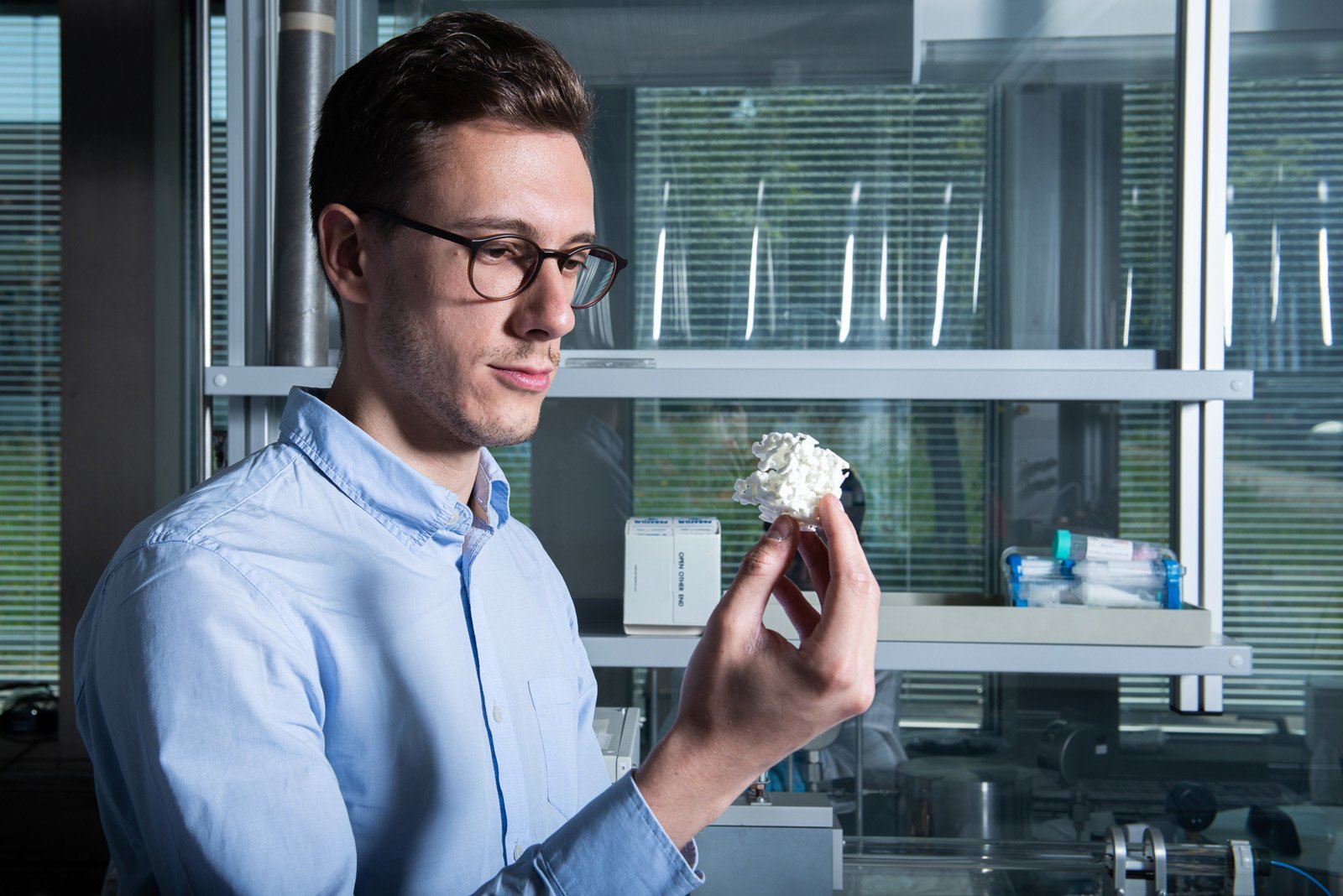 Researchers at the Paul Scherrer Institute PSI and ETH Zurich have developed a new material whose shape memory is activated by magnetism. It retains a given shape when it is put into a magnetic field. It is a composite material consisting of two components. What is special about the new material is that, unlike previous shape-memory materials, it consists of a polymer and droplets of a so-called magnetorheological fluid embedded in it. Areas of application for this new type of composite material include medicine, aerospace, electronics and robotics. The researchers are now publishing their results in the scientific journal Advanced Materials.

It looks like a magic trick: A magnet moves away from a black, twisted band and the band relaxes -without any further effect (see video). What looks like magic can be explained by magnetism. The black ribbon consists of a composite of two components: a silicone-based polymer and small droplets of water and glycerine in which tiny particles of carbonyl iron float. The latter provide the magnetic properties of the material and its shape memory. If the composite material is forced into a certain shape with tweezers and then exposed to a magnetic field, this shape is retained even when the tweezers are removed. Only when the magnetic field is also removed does the material return to its original shape.

So far, comparable materials have consisted of a polymer and embedded metal particles. Instead, researchers at PSI and ETH Zurich used droplets of water and glycerine to insert the magnetic particles into the polymer. In this way, they produced a dispersion similar to that found in milk. In milk, tiny fat droplets are finely dispersed in an aqueous solution. These are essentially responsible for the white colour.

Similarly, the droplets of the magnetorheological liquid are finely distributed in the new material. “Since the magnetically sensitive phase dispersed in the polymer is a liquid, the forces generated when a magnetic field is applied are much larger than previously reported”, explains Laura Heyderman, head of the Mesoscopic Systems Group at PSI and a professor at ETH Zurich. If a magnetic field acts on the composite material, it stiffens. “This new material concept could only come about through teamwork between groups with expertise from two completely different areas – magnetic and soft materials”, says Heyderman.

Shape memory through alignment with the magnetic field

The researchers studied the new material with the help of the Swiss Light Source SLS at PSI, among other things. With the X-ray tomographic images produced with this light source, they found that the length of the droplets in the polymer increases under the influence of a magnetic field and that the carbonyl iron particles in the liquid align at least partially along the magnetic field lines. These two factors increase the stiffness of the material tested by up to 30 times.

The fact that the shape memory of the new material is activated by magnetic fields offers further advantages in addition to higher force. Most shape-memory materials react to changes in temperature. In medical applications, two problems arise as a result. First, excessive heat damages the body’s own cells. Second, it is not always possible to guarantee uniform warming of an object that remembers its shape. Both disadvantages can be avoided by switching on the shape memory with a magnetic field.

“With our new composite material, we have taken another important step towards simplifying components in a wide range of applications such as medicine and robotics”, says ETH Zurich and PSI materials scientist Paolo Testa, first author of the study.

“Our work therefore serves as the starting point for a new class of mechanically active materials.”

Numerous applications in medicine, space flight, electronics, and robotics are conceivable for shape-memory materials. For example, catheters that are pushed through blood vessels to the surgical site in the body during minimally invasive operations could change their stiffness. This has the advantage that they only have to solidify when needed and therefore produce fewer side effects such as thromboses – for example when sliding through a blood vessel. In space exploration, shape-memory materials are in demand as a kind of tyres for rover vehicles that inflate or fold up again on their own. In electronics, soft functional materials can be found as flexible power or data cables, for example in so-called wearables, i.e., devices worn in clothing or directly on the body. Shape memory also opens up new possibilities in robotics; for example, shape-memory materials can perform mechanical movements without a motor.