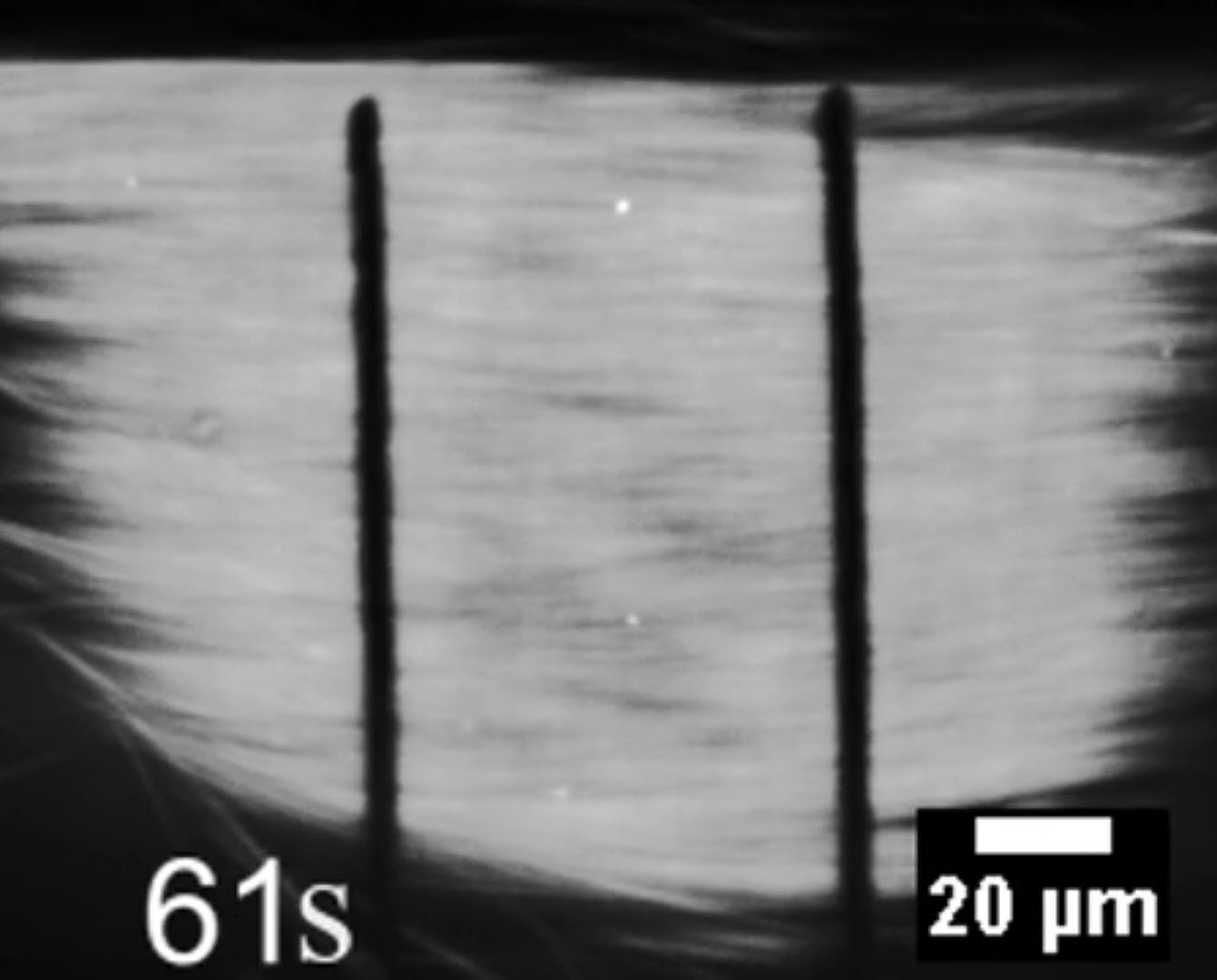 Fleets of microscopic machines toil away in your cells, carrying out critical biological tasks and keeping you alive. By combining theory and experiment, researchers have discovered the surprising way one of these machines, called the spindle, avoids slowdowns: congestion.

The spindle divides chromosomes in half during cell division, ensuring that both offspring cells contain a full set of genetic material. The spindle is made up of tens of thousands of stiff, hollow tubes called microtubules connected by biological motors.

Microtubules are only propelled forward when connected to a neighbor pointed in the opposite direction. Previous observations, however, showed microtubules cruising at full speed even when linked only to neighbors facing the same way. In a new paper published September 2 in Nature Physics, the researchers provide an answer to this puzzle. The microtubules are so entangled with one another that even those not actively launched forward get dragged along at full speed by the crowd.

“It’s like a New York City crosswalk,” says study lead author Sebastian Fürthauer, a research scientist at the Flatiron Institute’s Center for Computational Biology (CCB) in New York City. “People walking different ways are all mixed together, yet everyone is able to move at full speed and flow smoothly past one another.”

The findings will help scientists better understand the cellular machinery that segregates chromosomes during cell division and why this process sometimes goes wrong. If a spindle does its job incorrectly, it can introduce errors such as missing or extra chromosomes that can lead to complications like infertility and cancer, Fürthauer says.

Fürthauer and CCB director Michael Shelley, both applied mathematicians, worked on the project alongside an interdisciplinary team of experimental biologists and physicists from Harvard University, the Massachusetts Institute of Technology, Indiana University, and the University of California, Santa Barbara.

One of the overarching goals of biophysics is to link the activity of small-scale components to the large-scale dynamics of cells and organisms. The properties of the main spindle components are relatively well studied. Microtubules are long, stiff polymer rods akin to drinking straws, each with a ‘minus’ end and a ‘plus’ end. Molecular motors latch onto and move along microtubules using a pair of molecular ‘feet.’ Kinesin motors, for instance, have two pairs of feet, one at either end. Kinesin molecules can attach to two different microtubules, with each pair of feet marching from the minus end to the plus end of each microtubule.

Previous studies mostly focused on situations where motors were scarce. Scientists had assumed that this was an accurate representation of what happens in actual cells. In such a scenario, a microtubule’s movement would depend on its neighbors’ orientation. Microtubules aligned with their neighbors would stay put while those that defied the crowd would zoom forward.

Fürthauer and colleagues investigated how the microtubules would collectively move if the system were packed with lots of motors, resulting in lots of connections between microtubules. They developed a mathematical theory of how mechanical stresses develop in the collective when microtubules are pushed and pulled against each other by the numerous motors.

Their theory predicts that the microtubules line up, with every microtubule facing one of two opposing directions. Where microtubules of opposite orientation mingle, they are propelled forward as expected. Microtubules elsewhere, the theory states, are so entangled with their neighbors that they too are pulled along for the ride. Every microtubule, therefore, moves at precisely the speed of the walking motors regardless of its place in the crowd.

Experiments conducted by the researchers using microtubules and abundant kinesin motors matched these predictions. Additionally, the theory and experiments matched real-world spindles: In the eggs of African clawed frogs, microtubules in spindles move at roughly the same speed that the motors connecting them are known to walk.

The frog spindle behavior is “very suggestive that the actual biology lives in the regime we see in our experiments,” Fürthauer says.

“With this new understanding, we can now ask: How can we build a spindle? Can we reconstruct this complex biological machine in a computer simulation, or even in the test tube?”

He and his colleagues are hopeful that they are getting closer.