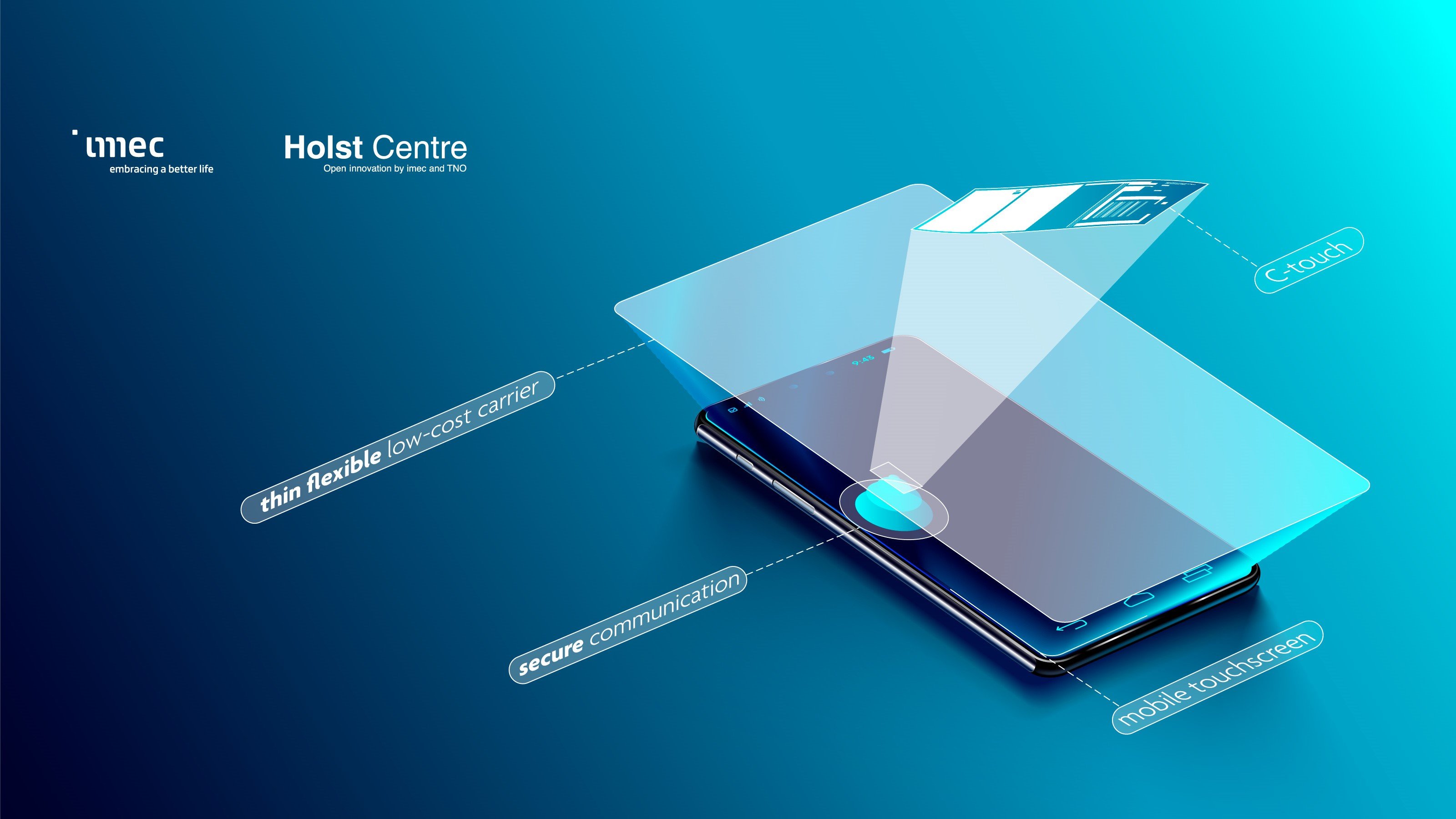 Imec, a world-leading research and innovation hub in nanoelectronics and digital technologies, TNO, and Cartamundi announced that they have developed a flexible capacitive identification tag that communicates with standard touch screens (C-touch). C-touch tags can be integrated in a wide range of paper and plastic based objects such as tickets, certified documents, payment cards, realizing smart products. The connection to the internet is established simply by placing the tagged object on the touchscreen or vice-versa. The results, developed in the framework of Holst Centre, an open innovation initiative by imec and TNO, were published in this week’s Nature Electronics.

C-touch tags are thin and flexible chips that can be integrated in paper and plastic products. They have a unique identifier which can communicate via any touchscreen. Smart cards or other objects with embedded C-touch tags can securely interact with the 4.5 billion mobile phones used worldwide, as well as with the large number of touch screens now being integrated in cars, booths, walls, coffee machines and all sorts of everyday objects. Without requiring additional hardware and major reconfigurations or additional costs for the users, C-touch tags provide a solution to label trillions of everyday objects to truly create the Internet-of-Everything. These tags offer security thanks to the very short communication range; general compatibility thanks to the presence of capacitive touchscreens everywhere; and the potential to be produced at low cost thanks to the monolithically integrated antenna.

Compared to existing RFID technologies such as NFC, the new C-touch tag does not require an external antenna. The tiny antenna is part of the chip itself, making the tag much smaller compared to current NFC tags. The small size enables integration into everyday objects. Thus, C-touch tags are an alternative in all those use cases where interaction via touchscreens is feasible, but RFID/NFC tags are either too large or too expensive or where contactless reading is a disadvantage. For example, in board games where cost is discriminator, to provide higher security in payment cards, or to replace difficult to service and manage hardware readers and access control points with easy to service and update apps on standard mobile devices, etc.

The new C-touch tag that imec, TNO and their partners have described in Nature Electronics is based on thin-film transistor technology and is powered by a thin-film battery or a thin-film photovoltaic cell that converts light from the touchscreen. The 12-bit thin-film capacitive identification tag achieves up to 36bps data transfer rates at 0.6V supply voltage, which is compatible with commercially available touchscreen devices without requiring modifications. The flexible thin-film integrated circuit has a 0.8cm2 on-chip monolithic antenna and dissipates only 38nW of power at 600mV supply voltage.

“Our C-touch tag paves the way to a multitude of new applications compared to standard RFID or NFC solutions as it takes advantage of the widespread availability of touchscreen readers compared to the limited amount of NFC readers,” says Kris Myny, principal scientist and R&D team leader at imec. “We are testing the tag system and communication method using a range of different touchscreens from a variety of brands, including Apple, Samsung and Huawei.”

“These tags provide new possibilities of connecting objects to internet and enabling Internet-of-Everything. Our next steps will be to further improve the performance of the tags, enable new features such as bi-directional communication with touchscreens, and work with companies in developing solutions based on C-touch tags in different application domains”, says Prashant Agrawal, program manager for thin film electronics at imec.

Steven Nietvelt, CTO of Cartamundi says: “We are very excited to be part of this project. The C-touch tages will enable us to even further blur the boundaries between digital and physical gaming and unlocks exciting new consumer experiences.”

This project was executed in the framework of Holst Centre, an open innovation initiative by imec and TNO. It has received funding from the European Union’s Horizon 2020 research and innovation program, project CAPID, under grant agreement No 732389 , the ERC project FLICs, under grant agreement No 716426 and through the Flexlines project within the Interreg V-programme Flanders-The Netherlands, a cross-border cooperation programme with financial support from the European Regional Development Fund,  and co-financed by the Province of Noord-Brabant, The Netherlands.