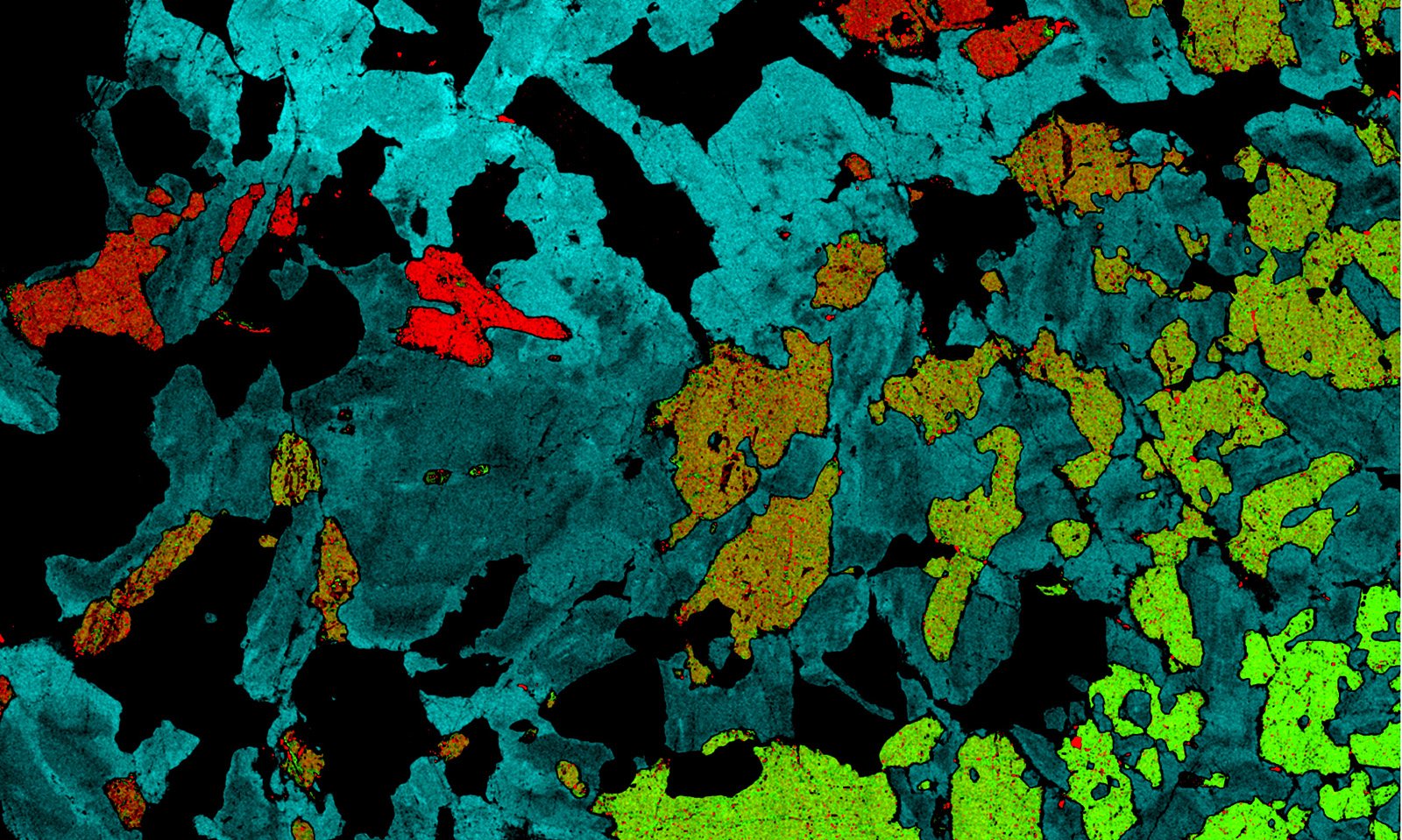 In countless grade-school science textbooks, the Earth’s mantle is a yellow-to-orange gradient, a nebulously defined layer between the crust and the core.

To geologists, the mantle is so much more than that. It’s a region that lives somewhere between the cold of the crust and the bright heat of the core. It’s where the ocean floor is born and where tectonic plates die.

A new paper published today in Nature Geoscience paints an even more intricate picture of the mantle as a geochemically diverse mosaic, far different than the relatively uniform lavas that eventually reach the surface. Even more importantly, a copy of this mosaic is hidden deep in the crust. The study is led by Sarah Lambart, assistant professor of geology at the University of Utah, and is funded by European Union’s Horizon 2020 research and innovation program and the National Science Foundation.

“If you look at a painting from Jackson Pollock, you have a lot of different colors,” Lambart says. “Those colors represent different mantle components and the lines are magmas produced by these components and transported to the surface. You look at the yellow line, it’s not going to mix much with the red or black.”

Our best access to the mantle comes in the form of lava that erupts at mid-ocean ridges. These ridges are at the middle of the ocean floor and generate new ocean crust. Samples of this lava show that it’s chemically mostly the same anywhere on the planet.

But that’s at odds with what happens at the other end of the crust’s life cycle. Old ocean crust spreads away from mid-ocean ridges until it’s shoved beneath a continent and sinks back into the mantle. What happens after that is somewhat unclear, but if both the mantle and the old crust melt, there should be some variation in the chemical composition of the magmas.

So Lambart and her colleagues from Wales and the Netherlands sought to discover what the mantle looks like before it rises as lava at a mid-ocean ridge. They examined cores drilled through the ocean crust to look at cumulate minerals: the first minerals to crystallize when the magmas enter the crust.

“We looked at the most primitive part of these minerals,” Lambart says, adding that once they located the primitive minerals they analyzed only the chemical composition from those very earliest minerals to form.

“If you are not actually looking at the most primitive part you might lose the signal of this first melt that has been delivered to the crust. That is the originality of our work.”

They analyzed the samples centimeter by centimeter to look at variations in isotopes of neodymium and strontium, which can indicate different chemistries of mantle material that come from different types of rock. “If you have isotopic variability in your cumulates, that means that you have to have isotopic variability in the mantle too,” Lambart says.

When the blender turns on

The likely reason, Lambart says, is that different rocks melt at different temperatures. The first rock to melt, for example the old crust, can create channels that can transport magma up to the crust. Melting of another type of rock can do the same. The end result is several networks of channels that converge towards the mid-ocean ridge but don’t mix—hearkening back to the streaks of paint on a Jackson Pollock painting.

To get at what this finding means for geology, picture a smoothie. No—go farther back than that and picture the blender carafe full of fruit, ice, milk and other ingredients. That’s like the mantle—discrete ingredients, as different from each other as a strawberry is from a blueberry. The fully blended smoothie is like the mid-ocean ridge lava. It’s fully mixed. At some point between the deep mantle and the mid-ocean ridge, Earth turns on the blender. Lambart says that her results show that at the very top of the mantle, the mixing hasn’t happened yet. The blender, it turns out, doesn’t turn on until somewhere in the crust.

Lambart’s work helps her and other geologists redefine their idea of how material moves up through the mantle to the surface.

“The problem is we need to find a way to model the geodynamic earth, including plate tectonics, to actually reproduce what is recorded in the rock today,” she says. “So far this link is missing.”

Now Lambart is setting up a new experimental petrology lab to study the conditions for the magmas to preserve their chemical compositions during their journey through the mantle and the crust.