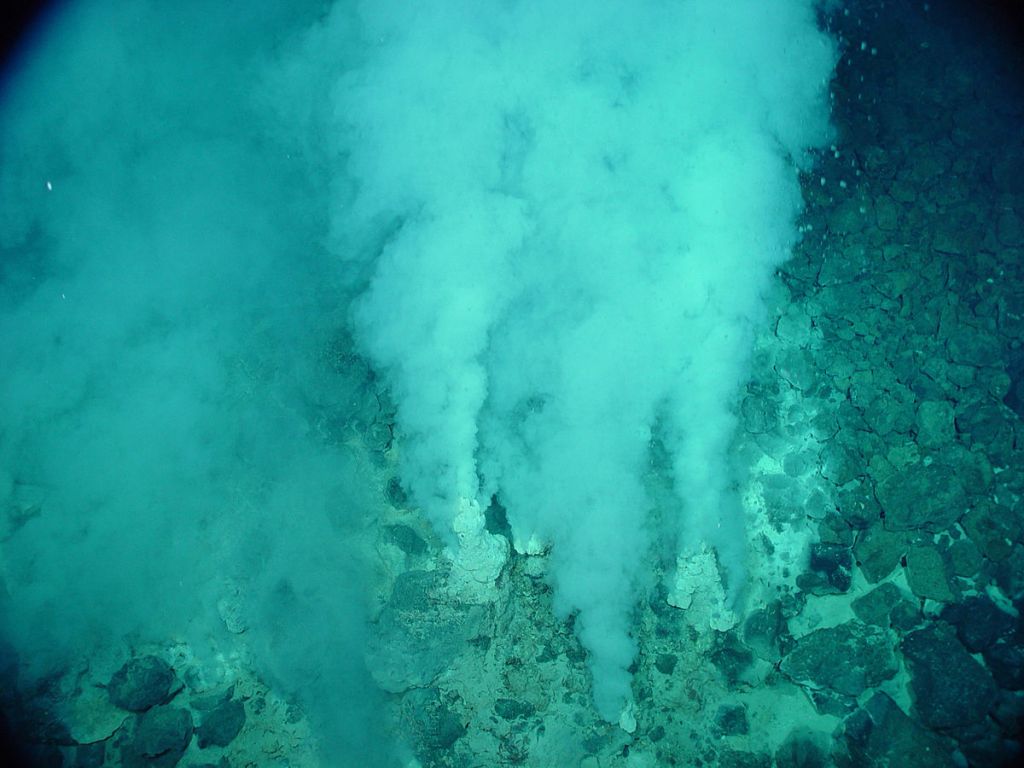 Researchers at Stanford University say they have found an aquatic highway that lets nutrients from Earth’s belly sweep up to surface waters off the coast of Antarctica and stimulate explosive growth of microscopic ocean algae.

Their study, published June 5 in the journal Nature Communications, suggests that hydrothermal vents – openings in the seafloor that gush scorching hot streams of mineral-rich fluid – may affect life near the ocean’s surface and the global carbon cycle more than previously thought.

Mathieu Ardyna, a postdoctoral scholar and the study’s lead author, said the research provides the first observed evidence of iron from the Southern Ocean’s depths turning normally anemic surface waters into hotspots for phytoplankton – the tiny algae that sustain the marine food web, pull heat-trapping carbon dioxide out of the air and produce a huge amount of the oxygen we breathe. “Our study shows that iron from hydrothermal vents can well up, travel across hundreds of miles of open ocean and allow phytoplankton to thrive in some very unexpected places,” he said.

Kevin Arrigo, a professor of Earth system science and senior author of the paper, called the findings “important because they show how intimately linked the deep ocean and surface ocean can be.”

Phytoplankton need iron to thrive, and that limits their abundance in vast swaths of the ocean where concentrations of the nutrient are low. But when conditions are right, phytoplankton can also grow explosively, blooming across thousands of square miles in a matter of days.

That’s what Ardyna noticed recently as he looked at data recorded in 2014 and 2015 by a fleet of floating robots outfitted with optical sensors in the Southern Ocean. More than 1,300 miles off the coast of Antarctica and 1,400 miles from the African continent, two unexpectedly large blooms cropped up in an area known for severe iron shortages and low concentrations of chlorophyll, an indicator of phytoplankton populations.

Massive blooms in this region could only be possible with an influx of iron. Ardyna and Arrigo quickly ruled out the ocean’s most common sources, including continental shelves, melting sea ice and atmospheric dust, which were simply too far away to have much influence.

That led them to suspect that the nutrient must be welling up from below, possibly from a string of hydrothermal vents that dot a mid-ocean ridge 750 miles from where the massive blooms had inexplicably appeared. To help test their hypothesis, they recruited an international team of collaborators specialized in various aspects of oceanography and modeling.

“It has long been known that hydrothermal vents create unique and profound oases of life,” Ardyna said.

Until recently, scientists generally believed those nourishing effects remained fairly local. But a growing amount of evidence from computer simulations of ocean dynamics has hinted that iron and other life-sustaining elements spewed from hydrothermal vents may in fact fuel planktonic blooms over much wider areas.

However, direct measurements have been lacking.

In the Southern Ocean, that’s partly due to the remote location, extreme cold and rough seas, which make it difficult to study up close or collect accurate data.

“Your sensors have to be in the right place at the right time to see these blooms,” Ardyna said.

“Satellites can underestimate intensity or miss them altogether because of bad coverage or strong mixing of the water column, which pushes phytoplankton down too deep for satellites to see.”

To track the flow of particles from the vents on the mid-ocean ridge, the scientists analyzed data from satellites measuring chlorophyll and from autonomous, sensor-laden buoys known as Argo floats. As they dive and drift along ocean currents, some of these buoys detect chlorophyll and other proxies for phytoplankton biomass. “The floats give us precious and unique data, covering a large section of the water column down to 1,000 meters deep during an entire annual cycle,” Ardyna said.

The scientists couldn’t directly measure iron in the water, but instead analyzed measurements of helium collected by scientific cruises in the 1990s. The presence of helium signals waters influenced by hydrothermal vents, which funnel large amounts of primordial helium from beneath Earth’s crust.

The chlorophyll, phytoplankton and helium data suggest that a powerful current circling Antarctica grabs nutrients rising up from vents. Two turbulent, fast-moving branches of the current then shuttle the nutrients eastward for a month or two before serving them like a banquet to undernourished phytoplankton. Together with the arrival of spring sunshine that phytoplankton need for photosynthesis, the delivery triggers a massive bloom that can likely absorb and store significant amounts of carbon from the atmosphere, said Arrigo, who is also the Donald and Donald M. Steel Professor in Earth Sciences.

Over time, the blooms drift eastward toward the current racing around Antarctica and fade as sea creatures devour them. “We suspect these hotspots are either consumed or exported to deep waters,” Ardyna said.

Each bloom lasts little more than a month, but the mechanisms that trigger them are likely to be more common in the global ocean than scientists previously suspected.

“Hydrothermal vents are scattered all over the ocean floor,” Ardyna said.

Knowing about the pathways that bring their nutrients up to surface waters will help researchers make more accurate calculations about the flow of carbon in the world’s oceans. “Much remains to be done to reveal other potential hotspots and quantify how this mechanism is altering the carbon cycle.”