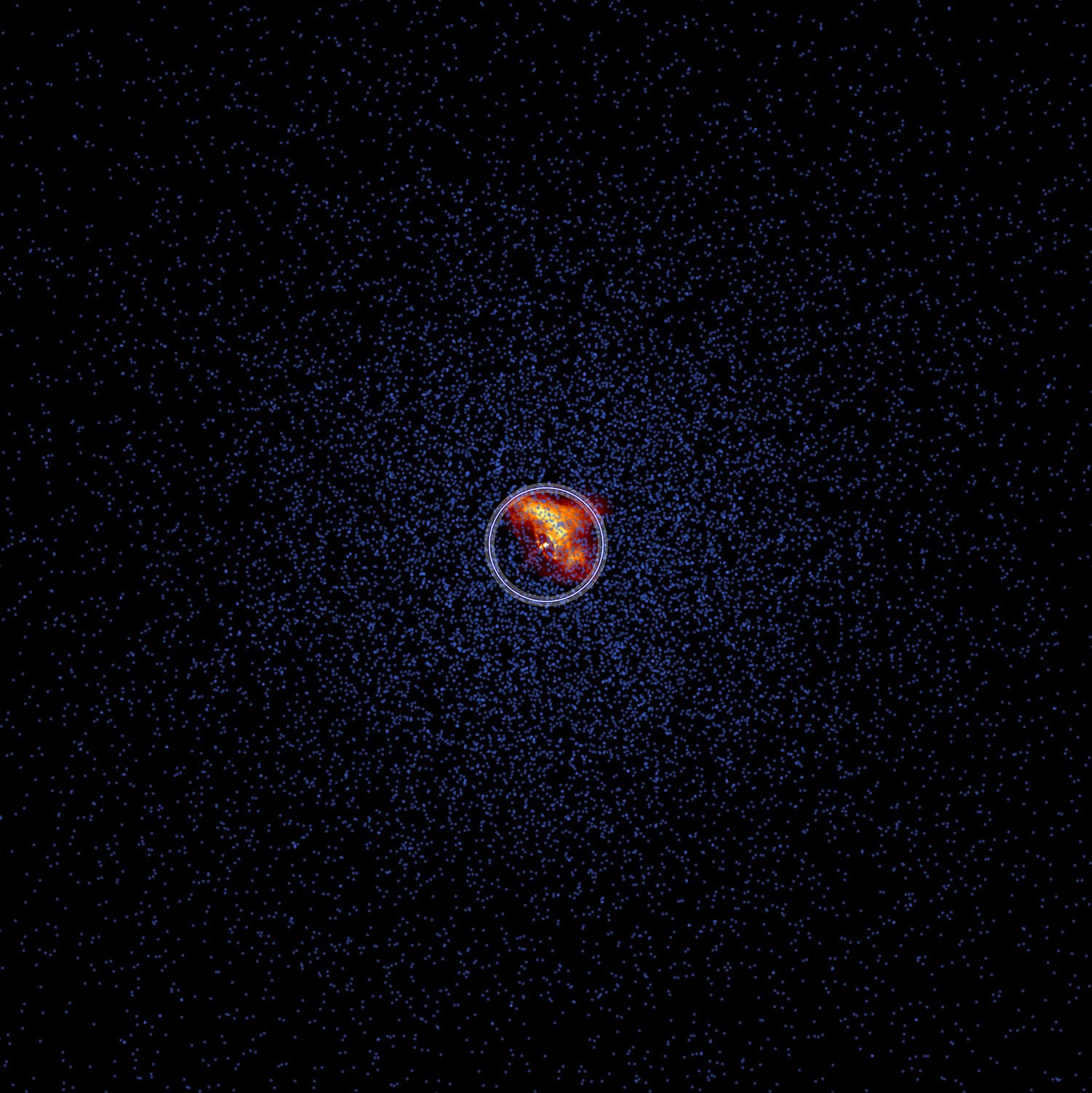 The Crab Nebula is the remnant of a supernova in our Galaxy which was observed almost 1000 years ago. Although it corresponds to one of the most studied celestial objects, its extension in very high energy gamma-rays has up to now remained unknown. The international team of scientists of the H.E.S.S. telescopes now finally succeeded to measure the extension of the Crab Nebula in very high energy gamma-rays.

Already when using binoculars, the Crab Nebula appears as an extended object.  Correspondingly, with e.g. optical or X-ray telescopes many of its components can be imaged in great detail.

“The extension of the Crab Nebula strongly depends on the observed energy range”, explains David Berge from DESY in Zeuthen, member of the H.E.S.S. collaboration. “This allows us to derive conclusions about astrophysical processes.”

Since the first detection of very high energy gamma-rays from the Crab Nebula with ground-based gamma-ray telescopes in 1989, it could not be distinguished from a point source. The reason for that was the comparably poor angular resolution. The first measurement of the extension of the Crab Nebula in very high energy gamma-rays is now presented in the journal Nature Astronomy by the scientists of the H.E.S.S. telescopes, which are situated in Namibia. This measurement is the result of modern analysis and simulation techniques, enabling a precision unprecedented in gamma-ray astronomy.’

The H.E.S.S. telescopes are used by the scientists to measure the Cherenkov light of particle showers to reconstruct the energy and direction of the corresponding gamma-rays.

“The accuracy of the direction reconstruction considerably depends on different influences, such as the observation conditions”, as explained by Markus Holler from the University of Innsbruck. “Reliable simulations are therefore necessary to measure the extension of a source.”

For the present measurement, the scientists utilised a new simulation framework for the first time. It takes into account the conditions of the Crab Nebula observations at a new level of detail. The accuracy gain regarding the simulation of data is impressively reflected in the result. The measured extension of the Crab Nebula is a factor of around two and a half smaller than the average direction uncertainty per gamma-ray.

The electromagnetic radiation of the Crab Nebula is predominantly emitted by energetic electrons as well as their antiparticles, the positrons. Two different processes are responsible for the emission: From radio to X-rays the radiation is caused by the deflection of the particles in the internal magnetic field of the nebula. Gamma-rays however result from the scattering of the electrons and positrons off light rays with lower energy.

“Observations of the Crab Nebula in gamma-rays are therefore independent from those at lower energies although the same particles are responsible for the emission”, says theoretician and H.E.S.S. scientist Dmitry Khangulyan from the Department of Physics of the Rikkyo University in Tokyo.

A comparison of the extension of the Crab Nebula at different energies shows a good agreement with theoretical models. The nebula exhibits a very high energy gamma-ray extension that is larger than that in X-rays but smaller than the one in the ultraviolet regime. The main reason for this behaviour are the respective energies of the electrons and positrons. With increasing energy, the particles are concentrated more towards the centre. As the particle energies that are responsible for the emission of gamma-rays   lie in between the ones of the other two mentioned ranges, the same follows for the extension of the Crab Nebula in gamma-rays.

“The confirmation of this expectation by H.E.S.S. is a nice example for the importance of both theory and experiment”, as highlighted by Dan Parsons from the Max Planck Institute for Nuclear Physics in Heidelberg.

The H.E.S.S. telescopes are named after Victor Franz Hess who discovered cosmic rays in 1912 and was rewarded with the Nobel prize in 1936. They measure gamma-rays with energies about 1000 billion times more energetic than visible light. When hitting the atmosphere, each gamma-ray initiates a multitude of particles, many of which are charged. These in turn emit visible light via the Cherenkov effect, an optical analogue to the supersonic boom. The operation of the H.E.S.S. telescopes in Namibia was started by an international collaboration in 2002.

The Crab Nebula belongs to the best studied astrophysical objects since the invention of the telescope. It shines brightly throughout the entire electromagnetic spectrum. It is the remnant of a supernova which was observed in 1054 in the constellation Taurus.