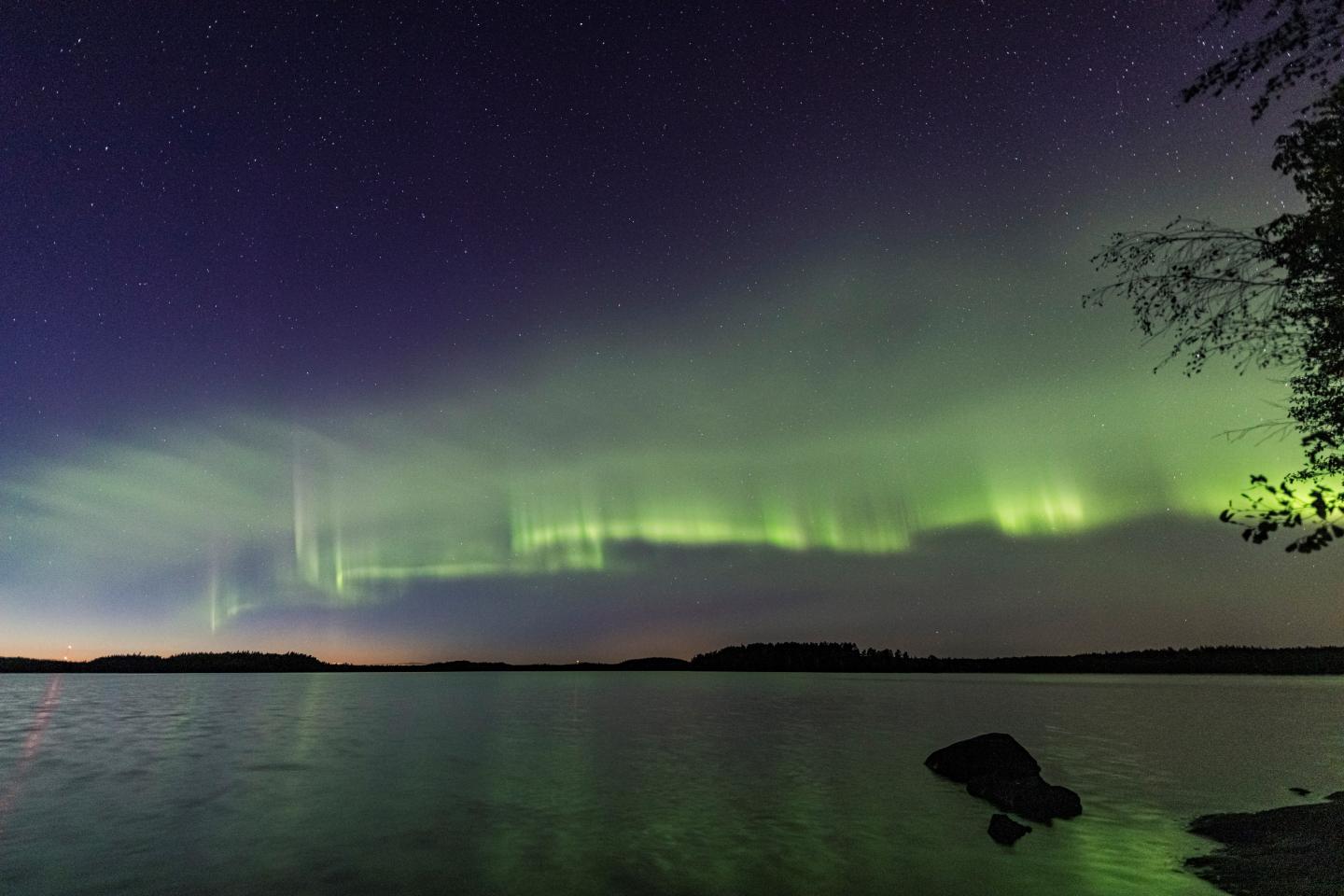 Working together with space researchers, Finnish amateur photographers have discovered a new auroral form. Named ‘dunes’ by the hobbyists, the phenomenon is believed to be caused by waves of oxygen atoms glowing due to a stream of particles released from the Sun.

In the recently published study, the origins of the dunes were tracked to a wave guide formed within the mesosphere and its boundary, the mesopause. The study also posits that this new auroral form provides researchers with a novel way to investigate conditions in the upper atmosphere.

The study was published in the first issue of the high-impact journal AGU Advances.

An unknown fingerprint appears in the sky

Minna Palmroth, Professor of Computational Space Physics at the University of Helsinki, heads a research group developing the world’s most accurate simulation of the near-Earth space and space weather that cause auroral emissions.

The sun releases a steady flow of charged particles, known as the solar wind. Reaching the Earth’s ionised upper atmosphere, the ionosphere, they create auroral emissions by exciting atmospheric oxygen and nitrogen atoms. The excitation state is released as auroral light.

In late 2018, Palmroth published a book entitled ‘Revontulibongarin opas’ (‘A guide for aurora borealis watchers’). The book was born out of Palmroth’s cooperation with Northern Lights enthusiasts and the answers she provided to questions about the physics of the phenomenon in the hobbyists’ Facebook group.

Thousands of magnificent photographs of the Northern Lights taken by hobbyists were surveyed and categorised for the book. Each auroral form is like a fingerprint, typical only of a certain phenomenon in the auroral zone. During the classification, hobbyists pointed out that a certain auroral form did not fit into any of the pre-existing categories. Palmroth set aside these unusual forms for later consideration.

By an almost unbelievable coincidence, just days after the book was published, the hobbyists saw this unusual form again and immediately informed Palmroth. The form appeared as a green-tinged and even pattern of waves resembling a striped veil of clouds or dunes on a sandy beach.

“One of the most memorable moments of our research collaboration was when the phenomenon appeared at that specific time and we were able to examine it in real time”, says Northern Lights and astronomy hobbyist Matti Helin.

Waves newly revealed by the aurora

Investigations into the phenomenon were launched, with hobbyist observations and scientific methods coming together to explain the waves.

“It was like piecing together a puzzle or conducting detective work,” says Helin. “Every day we found new images and came up with new ideas. Eventually, we got to the bottom of it…”

The phenomenon was photographed at the same time in both Laitila and Ruovesi, southwest Finland, with the same detail observed in the auroral emission in both images. Maxime Grandin, a postdoctoral researcher in Palmroth’s team, identified stars behind the emission and determined the azimuths and elevations of the stars with the help of the astronomy software program Stellarium. This made it possible to use the stars as points of reference when calculating the altitude and extent of the auroral phenomenon.

Grandin found that the auroral dunes occur at a relatively low altitude of 100 kilometres, in the upper parts of the mesosphere. The wavelength of the wave field was measured to be 45 kilometres.

A total of seven similar events – where a camera had recorded the same even pattern of waves – were further identified from the ‘Taivaanvahti’ (‘Sky Watch’) service maintained by the Finnish Amateur Astronomer Association, Ursa.

The part of the auroral zone where the Earth’s electrically-neutral atmosphere meets the edge of space is an extremely challenging environment for satellites and other space-borne instruments. Palmroth says this is why it is one of the least studied places on our planet.

“Due to the difficulties in measuring the atmospheric phenomena occurring between 80 and 120 kilometres in altitude, we sometimes call this area ‘the ignorosphere’,” she says.

The dunes were observed precisely in that particular region of the auroral zone. The observed phenomenon guided the researchers towards a middle ground between atmospheric research and space research, as the usual methodology of space physics could not explain it alone.

“The differences in brightness within the dune waves could be due to either waves in the precipitating particles coming from space, or in the underlying atmospheric oxygen atoms,” says Palmroth. “We ended up proposing that the dunes are a result of increased oxygen atom density.”

Next, the team had to determine how the variability in the density of the oxygen atoms caused by gravity waves in the atmosphere results in such an even and widespread field of waves. Normally at the altitude of study there are many different kinds of gravity waves travelling in different directions at different wavelengths, which is why they do not easily form the even wavefields exhibited by the dunes.

The study suggests that the phenomenon in question is a mesospheric bore, a rare and little-studied phenomenon that takes place in the mesosphere. The tidal bore phenomenon is a wave common to many rivers, where the tide travels up the river channel.

When the oxygen atoms in the bore collide with the electrons precipitating down upon the atmosphere, they become excited. When releasing this excitation, they create the auroral light. This is why mesospheric bores – a phenomenon thus far considered a very challenging subject of research – can occasionally be seen with the naked eye.

Space researchers focus on the atmosphere

Prior to this discovery, mesospheric bores were not observed in the auroral zone, nor have they been investigated via auroral emissions.

“The auroral zone as a whole is usually discounted in studies focused on the bore, as auroral emissions impair the technique used to identify mesospheric bores,” says Palmroth.

Traditionally, researchers specialising in the atmosphere and space have largely investigated their topics of interest separate from each other. This is because there are only a handful of known mechanisms of interaction between the ionosphere bathing in the precipitating electrons, and the neutral atmosphere.

With the help of measuring devices operated by the Finnish Meteorological Institute, the dunes were found to occur simultaneously and in the same region where the electromagnetic energy originating in space is transferred to the ignorosphere.

“This could mean that the energy transmitted from space to the ionosphere may be linked with the creation of the inversion layer in the mesosphere,” says Palmroth. “In terms of physics, this would be an astounding discovery, as it would represent a new and previously unobserved mechanism of interaction between the ionosphere and the atmosphere.”