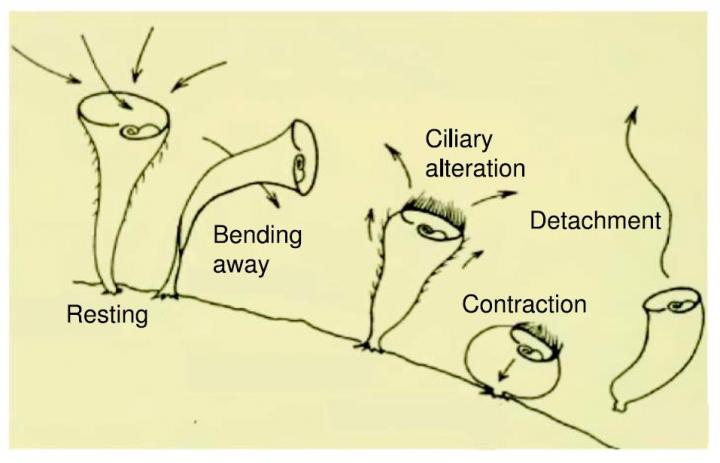 More than 100 years ago, a zoologist by the name of Herbert Spencer Jennings described surprisingly complex and varied avoidance behaviors in a single-celled freshwater protist known as Stentor roeseli. When later experiments in a related organism failed to reproduce what he’d seen, his claims were discredited and pushed aside.

But now, a report publishing in the journal Current Biology on December 5 confirms what Jennings had witnessed all those years ago: observations captured by the researchers on video show that S. roeseli varies its response upon being squirted with a stream of polystyrene beads. The findings suggest that a single-celled organism can make decisions that allow it to, in essence, “change its mind.”

“Protists have to operate in complex ecological environments and naturally exhibit complex problem-solving behaviors, such as navigating, hunting and locating mating partners,” says Jeremy Gunawardena of Harvard Medical School. But, he continues, “what’s particularly fascinating about what Jennings described is that it shows complex decision-making, with the organism effectively ‘changing its mind’ as to what it does in response to the same stimulus. We typically think of such autonomous cognitive behavior as taking place in multi-cellular organisms with nervous systems, but here we see that single-celled organisms also have such capabilities.”

S. roeseli is a colorless, trumpet-shaped protist, big enough to see without a microscope. Its rows and spirals of cilia beat to bring food particles into its “mouth.” In most cases, S. roeseli anchors itself to algae or other detritus and stays put.

But, as Jennings noted, S. roeseli can respond in several different ways to an unpleasant stimulus. It can bend out of the way, alter the direction of its beating cilia to repel the stimulus, or contract – with contraction sometimes leading to the cell detaching from its algae and swimming away from the annoying stimulus. Jennings also found that the responses tended to happen in a particular order if an unpleasant stimulus was applied again and again, with contraction and detachment happening only after the first two strategies had been repeatedly attempted unsuccessfully.

One reason that previous studies that attempted to replicate Jennings’ findings may have been unsuccessful was because they had used a different species of Stentor. So in the new study, the researchers made sure to acquire the correct species, S. roeseli, grow it in the lab and then tried to repeat what Jennings had done, watching what the protist did when squirted with carmine powder suspended in pond water.

As it happened, the carmine got little reaction in the studies by Gunawardena’s team. So did many other alternatives. Finally, the researchers tried polystyrene beads in solution. The researchers placed the organisms in a droplet under a microscope equipped for video recording. They then squirted the tiny beads at them with a fine pipette.

Lo and behold, the protists acted in all the ways that Jennings had described. After being squirted, a protist bent away from the stimulus, altered the direction of its cilia, contracted repeatedly, or detached and swam away. However, the team also found much greater variation between organisms, with few instances in which all the behaviors took place in the order which Jennings had reported. The team develop a method of statistical analysis which showed that the order was indeed present, on average. Typically, the protists tend to bend and reverse their cilia as strategies to avoid unpleasant stimuli first and only progress to contraction if the stimuli continue.

Overall, the findings suggest a hierarchy of avoidance behaviors that are determined based on previous experience.

“We consider the behavior hierarchy as a form of sequential decision making,” the researchers write.

The team’s statistical analyses also suggest that when it came to whether to contract or to detach and swim away, the odds were almost precisely 50:50. The protists were somehow making decisions as if they’d tossed a fair coin – a rather surprising ability for a single cell. Going forward, the members of the research team now hope to explore the mechanisms underlying the fair coin toss and to study the protist’s behavior with modern machine-learning techniques.