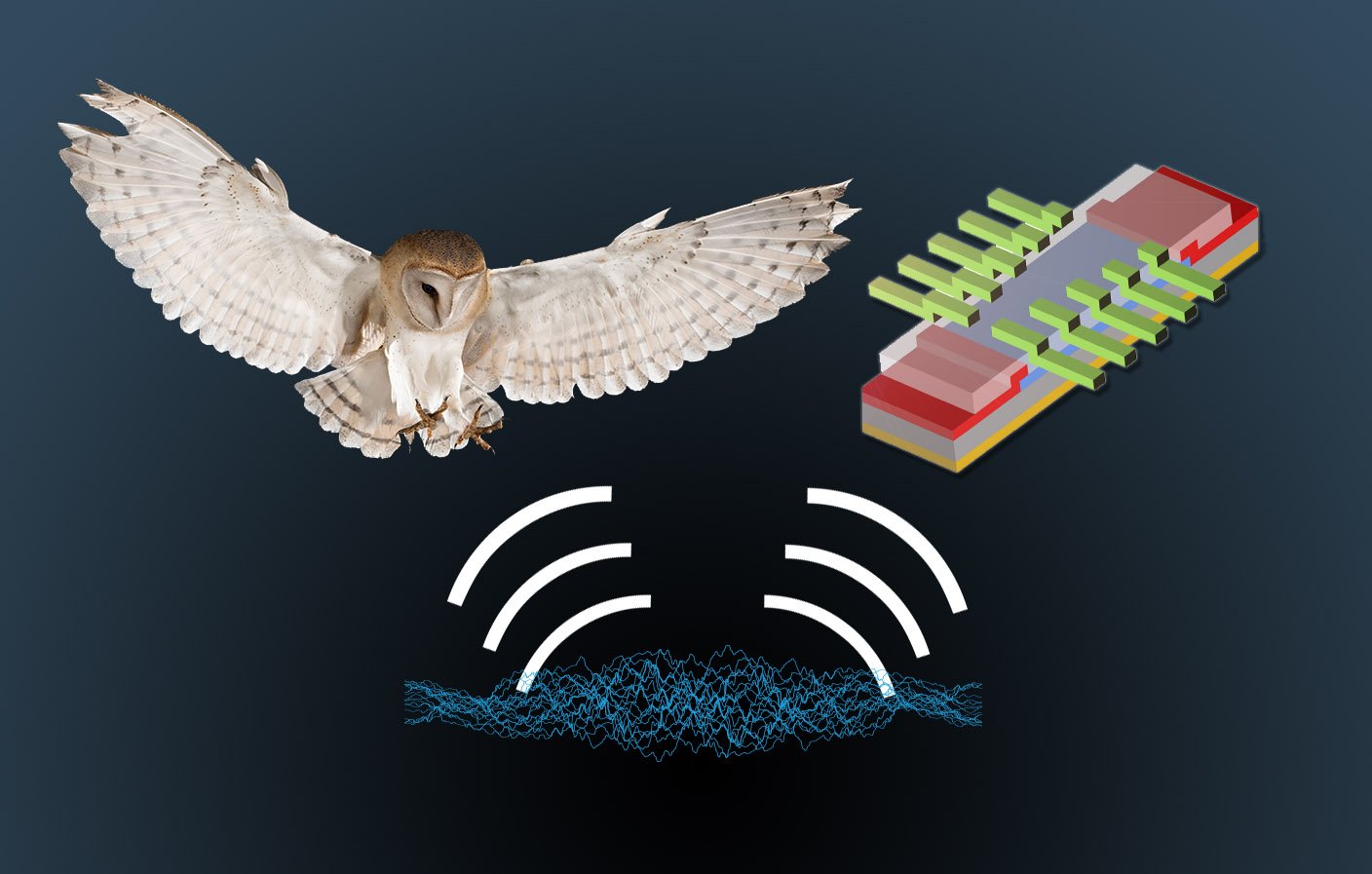 The way barn owl brains use sound to locate prey may be a template for electronic directional navigation devices, according to a team of Penn State engineers who are recreating owl brain circuitry in electronics.

“We were already studying this type of circuitry when we stumbled across the Jeffress model of sound localization,” said Saptarshi Das, assistant professor of engineering science and mechanics.

The Jeffress model, developed by Lloyd Jeffress in 1948, explains how biological hearing systems can register and analyze small differences in the arrival time of sound to the ears and then locate the sound’s source.

“Owls figure out which direction the sound is coming from to within one to two degrees,” said Saptarshi Das. “Humans are not that precise. Owls use this ability for hunting especially because they hunt at night and their eyesight isn’t all that good.”

The ability to use sound to locate relies on the distance between the ears. In barn owls, that distance is quite small, but the brain’s circuitry has adapted to be able to discriminate this small difference. If the owl is facing the sound source, then both ears receive the sound simultaneously. If the sound is off to the right, the right ear registers the sound slightly before the left.

However, locating objects by sound is not that simple. The speed of sound is faster than the owl’s nerves can function so after the owl brain converts the sound to an electrical pulse, the pulse is slowed down. Then the brain’s circuitry uses a lattice of nerves of different lengths with inputs from two ends, to determine which length is where the two signals coincide or arrive at the same time. This provides the direction.

Saptarshi Das and his team have created an electronic circuit that can slow down the input signals and determine the coincidence point, mimicking the working of the barn owl brain.

The team created a series of split-gate molybdenum sulfide transistors to mimic the coincidence nerve network in the owl’s brain. Split-gate transistors only produce output when both sides of the gate match, so only the gate tuned to a specific length will register the sound. The biomimetic circuitry also uses a time-delay mechanism to slow down the signal.

While this proof-of-concept circuit uses standard substrates and device types, the researchers believe that using 2D materials for the devices would make them more accurate and also more energy efficient, because the number of split-gate transistors could be increased, providing more precise coincidence times. The reduction in power consumption would benefit devices working in the low-power domain.

“Millions of years of evolution in the animal kingdom have ensured that only the most efficient materials and structures have survived,” said Sarbashis Das.

“In effect, nature has done most of the work for us. All we have to do now is adapt these neurobiological architectures for our semiconductor devices.”

However, having only the direction will not provide the location of the sound source. To actually navigate or locate, a device would need to know the height of the sound source as well. Saptarshi Das noted that height is a property of the intensity of the sound and the researchers are working on this aspect of the problem.

“There are several animals that have excellent sensory processing for sight, hearing and smell,” said Saptarshi Das. “Humans are not the best at these.”

The team is now looking at other animals and other sensory circuitry for future research. While existing research in the field of neuromorphic computing focuses on mimicking the intellectual capacity of the human brain, this work sheds light on an alternate approach by replicating the super sensors of the animal kingdom. Saptarshi Das considers this a paradigm change in this field.