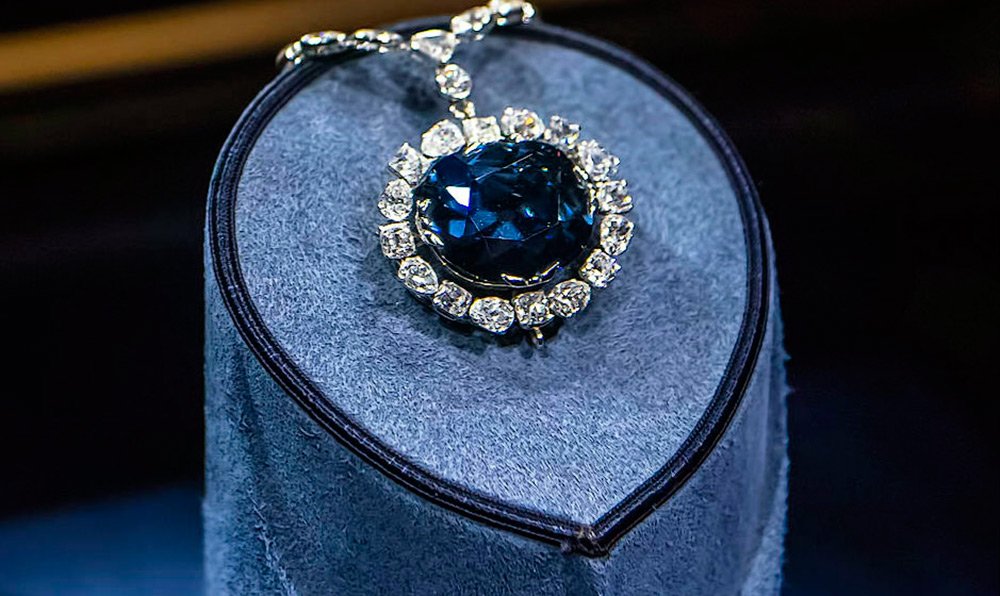 Type IIa diamonds are by definition stones which have very low nitrogen contents, below analytical detection limits. The presence of nitrogen in a diamond results in a yellow colour, but stones which do not have nitrogen impurities can have excellent white colours, including the top D-colour category. Some Type II diamonds can be very large, making them exceptionally valuable gems, with the Cullinan diamond, recovered from the Cullinan mine in South Africa, weighing 3106 carats (over 600g). These large gem-quality stones have been given the acronym “CLIPPIR” (Cullinan-like, inclusion poor, irregular and resorbed).

Type IIb diamonds also have low nitrogen concentrations, but have small concentrations of boron, which give them a blue colour. Some of these blue stones can also be large (>100ct). The most famous of these is the Hope diamond, originally over 100ct in weight, which was recovered from alluvial deposits in India, and was once owned by Louis XVI of France, and is now on display in the Washington Smithsonian Institute. The 122ct Cullinan Dream is a blue stone which was recovered from the Cullinan mine in South Africa.

Type IIa diamonds were originally loosely treated as constituting a single unique population, but recent research has shown that they represent multiple populations, formed in association with a variety of different mantle rocks. Some form in the lithosphere – the shallow, rigid part of the earth’s mantle, which extends to depths around 200km. However, recent work has identified a sub-population with tiny mineral inclusions which demonstrates that they form at depths of 400-600 km, well below the lithosphere. There are strongly divergent views as to whether the CLIPPIR Type IIa stones are derived from the lithosphere, or the deeper sub-lithospheric mantle

The recent Nature paper by Evan Smith and co-workers provides invaluable new data on the exceptionally rare Type IIb diamonds (perhaps 0.1% of all diamonds). It is also of exceptional importance as it demonstrates that the deep sub-lithospheric mantle is highly reducing, with native iron a stable phase. These authors conclude that all blue diamonds are from the deep mantle, but we propose that their data indicate rather that there are two distinct blue diamond populations. One is indeed of lower mantle provenance, but we argue that the second is derived from much shallower depths (~150-200 km) in the lithosphere, and that the large gem Type IIb stones (such as the >100ct Hope and Cullinan Dream) are linked to this lithospheric population. The implication is that, like Type IIa diamonds, the blue Type IIb suite do not constitute a single population, but have multiple sources, and that both the deep mantle and the lithosphere are characterized by the presence of trace concentrations of boron which may be incorporated in diamonds.

We conclude further that the large, gem-quality blue Type IIb diamonds are linked to the population of large CLIPPIR Type IIa stones), and that both are formed in association with a rare and enigmatic suite of lithospheric mantle rocks known as websterites. Our focus has thus been primarily to argue for a lithospheric, websteritic origin for the large, gem-quality Type IIa and Type IIb diamonds. This, in turn, has important implications for trying to develop proxy sampling methods to gauge whether a kimberlite may contain economic amounts of gem Type II diamonds without having to carry out extremely expensive bulk sampling programmes.

We do not address the possible implications of two distinct populations of blue Type IIb diamonds for deep mantle subduction of oceanic crust, as this question is beyond the scope of our study.