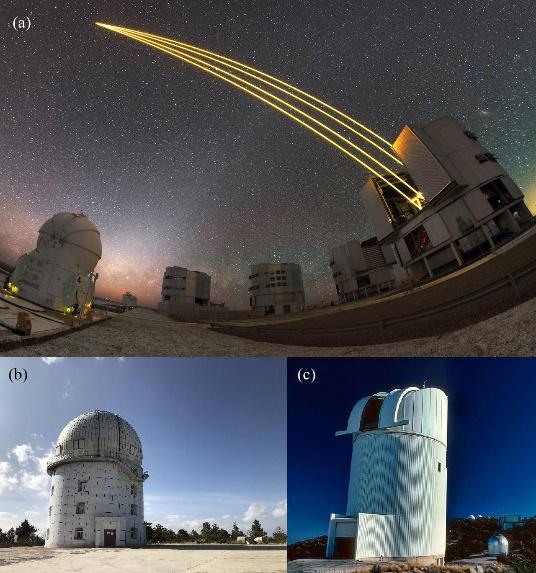 Since the discovery of quasars more than a half a century ago, measuring their distances has always been a fundamental problem for cosmology. Recently, a team led by Professor Jian-Min Wang from the Institute of High Energy Physics of the Chinese Academy of Sciences (CAS) developed a new geometric method and successfully measured the cosmological distance to the first identified quasar 3C 273. This new scheme demands observations with extremely high angular resolution, which can only be achieved by an interferometer surmounting the Rayleigh diffraction limit. In the past decade, the European Southern Observatory (ESO) has developed the capability to conduct observations with the unprecedented spatial resolution of 10 micro arcseconds using the Very Large Telescope Interferometer (VLTI).

Combining such observations of 3C 273 with data from a 10-year reverberation mapping campaign using the Bok 2.3-meter telescope of Steward Observatory in the United States and the Lijiang 2.4-meter telescope of the Yunnan Observatory of the CAS, Wang’s team measured the distance to the quasar directly. This new method does not rely on any existing distance ladders, nor does it depend on the correction of extinction, reddening, or calibration issues necessary for traditional methods. In particular, the systematic errors of the new technique can be understood through repeated observations. This method opens a new avenue for measuring the geometry of the Universe precisely and revealing the expansion rate and its history. The research entitled “A parallax distance to 3C 273 through spectroastrometry and reverberation mapping”was published in Nature Astronomy on January 13, 2020.

High-precision distances are the foundation of cosmology. In the 1920s, American astronomer E. Hubble discovered that the Universe is expanding: galaxies are moving away from us, and their recession speed (redshift) is proportional to their distances. The slope describing this relationship is now known as the Hubble constant, which represents the current expansion rate of the Universe. One of the goals of observational cosmology is the determination of the redshift and distances of celestial objects across cosmic history, from which astronomers can learn about the age, geometry, and composition of the universe, as well as looking for new physics. It is routine to obtain the redshift of distant objects precisely, but accurately measuring distances is much more challenging.

Traditional tools for distance measurement use particular classes of objects, primarily Cepheid variable stars and type Ia supernovae. Hubble’s law was established from distance measurements based on the Cepheid period-luminosity relation discovered by American astronomer H. S. Leavitt in 1912. Using the relation, a measurement of the period of the brightness variation provides the intrinsic luminosity of a Cepheid, which in turn allows its distance to be calculated. This method is so powerful that it is still used today as one of the standard tools for distance measurement. At present, the farthest Cepheid yet observed is 29 megaparsecs (about 100 million light years) away from the earth. Farther Cepheids are too faint to observe even with modern telescopes. Moreover, the brightness of a Cepheid is generally affected by extinction and reddening, thus influencing the accuracy of its inferred distance. Fortunately, owing to the well-known mass limit of white dwarfs in Chandrasekhar’s theory, it was discovered that type Ia supernovae can accurately enough serve as standard candles. These supernovae are so bright that their luminosities are comparable to those of their host galaxies and allow astronomers to measure their distances much farther away than Cepheids can even be seen. In the 1990s, S. Perlmutter, B. Schmidt, and A. Riess observed high-redshift type Ia supernovae and measured the distance-redshift relation, leading to the discovery of accelerated expansion of the Universe powered by dark energy. In 2011, they were awarded the Nobel Prize in Physics. Similar to Cepheids for distances, the supernovae method also relies on extinction and reddening corrections because it involves luminosity. Moreover, it is also limited by the calibration of the Phillips relation.

“Precision Cosmology” has developed from highly accurate measurements of the cosmic microwave background (CMB), which was discovered in 1965 as a key scientific breakthrough. Measurements of temperature fluctuations in the CMB can deliver cosmological parameters, including the Hubble constant. The latest observations indicate a 4.4σ difference between the Hubble constant given by traditional methods and those using the CMB, which is known as the “Hubble constant tension”. The tension implies either some unknown subtle factors involving the two procedures, or that the standard model of cosmology needs modifications calling for new physics. At such a crossroads, astronomers must develop new precise tools for measuring distances and the Hubble constant. The new tool should not rely on existing distance ladders or CMB modeling. Moreover, new approaches need to have an accuracy comparable to existing tools (around 2%).

Astronomers have always sought to achieve ever sharper images in order to observe smaller and more distant objects. The groundbreaking VLTI instrument GRAVITY, designed and built by ESO astronomers at a cost of nearly 100 million Euros, achieves an amazing angular resolution of 10 in the near-infrared band (equivalent to that of a 130-meter telescope). Since beginning operations in 2017, GRAVITY has yielded a series of exciting results in the fields of exoplanets, the Galactic center, and gravitational microlensing, instantly expanding our knowledge about the Universe. From 2017 to 2018, the GRAVITY team successfully resolved the broad line region （BLR） of ​​3C 273, and measured its angular size to be 46 , the first such measurement ever made of the BLR of quasar. Contemporaneously, Wang’s team had been using the Lijiang 2.4-meter telescope to conduct a long-term spectroscopic monitoring campaign of quasars to measure their black hole masses. By determining the delay of the response of a broad emission line relative to the driving continuum variations, the physical size of the BLR can be obtained. This is known as reverberation mapping. The geometry and dynamics of the BLR and the mass of the central supermassive black hole can also be inferred through detailed analysis. The team had successfully monitored a sample of quasars with super-Eddington accreting massive black holes and found smaller than expected BLR sizes, also later confirmed by the US-based Sloan Digital Sky Survey. In the past decade, they have developed the necessary analysis methods and software, laying a solid foundation for precision measurement of BLR sizes.

Wang’s team jointly analyzed data from GRAVITY/VLTI interferometry and reverberation mapping to produce a direct measurement of the distance to 3C 273, thus paving a new way to resolve the “Hubble constant tension”. After the GRAVITY team published their results for 3C 273, Wang’s team immediately realized the complementarity of the two independent data sets: GRAVITY observes the angular size of the BLR, while the reverberation mapping observes the physical size. Through comprehensive modeling, they obtained an angular distance of for 3C 273 and a Hubble constant of . Using the single quasar, the statistical error of the Hubble constant measurement is already as low as 16%.

One of the expert referees remarked that “the manuscript represents a very timely, very welcome description of an exciting, obvious next approach in order to improve both black hole mass and (cosmological) distance measurements.”

Currently, the two teams are coordinating observations to expand the sample. According to GRAVITY’s present capability, there are about 50 targets suitable for similar reverberation mapping joint observations. It is expected that the resultant accuracy of the Hubble constant will be better than 2% in the near future, providing an independent measurement to solve the problem of the “Hubble constant tension”. The capability of the next-generation GRAVITY instrument will be greatly improved in the next 5 years or so. At that time, it will be able to measure distances of fainter quasars with redshifts up to z = 3 and establish a distance-redshift relation across cosmic time. This will allow astronomers to measure Hubble parameters accurately, reveal the expansion history of the Universe, and examine cosmological models for dark matter and dark energy.

This research is supported by National Natural Science Foundation of China and the Ministry of Science and Technology of China.