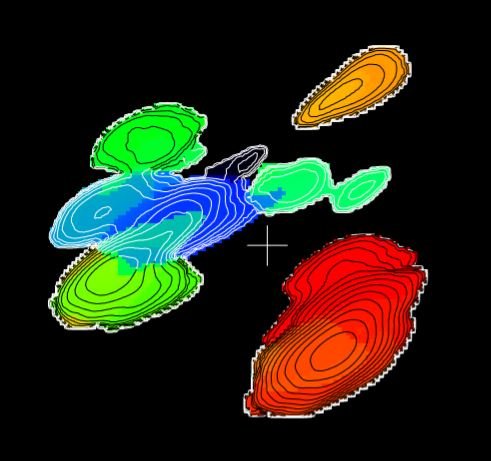 Our Galaxy is populated with billions of bright stars that have masses equivalent from ten to many tens the mass of the Sun. Despite their short and turbulent existence, these stars play a paramount role in astrophysics. For example they forge metals and more heavier chemical elements and eject them into space at the end of their life, when they will explode as supernovae and will then become neutron stars or black holes. How these massive stars form remains a mystery.

The current best star formation theories predict the intense radiation of the high-mass new-born stars (also called protostars) should limit their mass growth to around eight times the mass of the sun. The disagreement between theory and observation has troubled astronomers for decades, with several competing theories emerging, each attempting to complete the theory of high-mass star formation. One such theory proposes that high-mass protostars gather their mass via brief bursts of `episodic accretion’. The theory predicts short, intense accretion bursts in which the protostar gains mass from its surrounding accretion disk, followed by long periods of inactivity lasting hundreds, to thousands of years.

In January 2019 astronomers at Ibaraki University, Japan, noticed that one such high-mass protostar called G358-MM1, showed signs of new activity indicative of a potential accretion burst. In response, a collaboration of astronomers called the Maser Monitoring Organisation (M2O) gathered several radio telescopes from Australia, New Zealand and South Africa to form a telescope array capable of detecting emission stimulated by the heat of the accreting protostar. The team, lead by Ross Burns of the National Astronomical Observatory of Japan compared multiple images spaced a few weeks apart to reveal a “heat-wave” of thermal energy radiating outward from the location of G358-MM1. The cause of the heat-wave was later confirmed to originate in an accretion event by the plane-borne SOFIA telescope.

“The M2O observations are the first to witness the immediate aftermath of an accretion burst in a high-mass protostar in such detail, which provide evidence in support of the `episodic accretion’ theory of high-mass star formation. Our team greatly benefits from close communication between a diverse, global community of observers, astrophysicists and theorists in planning, executing and interpreting transient maser events” says Ross Burns.

The result, published today in Nature Astronomy, will be followed by a series of deeper investigations into the nature of high-mass protostars, their formation mechanisms and their environments.